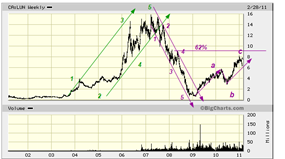 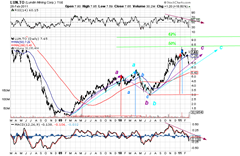 These guys are copper miners operating in such charming vacation destinations as the Congo. First they were going to marry Inmet and then a better partner come out of the African bush and made a somewhat better offer (cash upfront, in part at least) and it now looks like the second suitor will win out.

Either way this stock is a sell in my opinion. The stock , which had dropped from $16 to less than $1, has retraced almost 50% and almost to the 4th wave on the way down. It has done this in a fairly clear a-b-c, and all though not precisely equal the two legs are equal in terms of the vertical distance. The RSI and MACD did not confirm the recent tops.