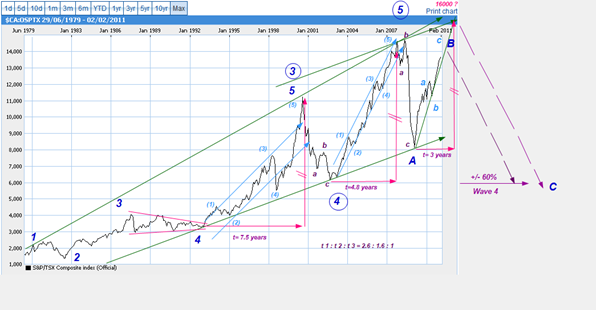 A few days ago I put out this chart and argued that this index could implode any time now. The B wave seems near completion (at last) but if that does not turn the tide we will soon double top (15070, or so) and failing that either the parallel trend-line or the line through the tops at about 16000. Still a long way possible but not in the grand scheme of things. So why are we over-valued at these levels?  Essentially because the Fed. orchestrated every single top artificially. If it was not for Long Term Capital. Enron, Y2K or 9/11 and the associated flooding of the monetary system, these peaks would not occur They are not normal.

Here are just a few examples of what drives the index into these peaks.

Nortel at the peak constituted 30% of the TSE. It was a child of that “widows and orphans” blue chip stock Bell. Most brokers did not recalibrate stock allocations.(the actual high was only $124.55, not $800. But the chart is adjusted backwards for stock splits.

Lots of people got rich on JDS , most gave it back. Optic fiber  and that sort of stuff that was not well understood. Global Crossing was in the same field.

GLW, Corning. Most only knew this one for the pots that they made for in the oven. They too went into the fiber optics business where over capacity killed the goose very early in the game.

WIN, with a ticker symbol like this how can you lose? This is Wiland.

There are easily a few dozen more but the point is that you only need a handful of such stocks and you peak well above where you normally would.  You get a little stock tsunami where each and everyone contributes to amplifying the index. Today there are not quite as many high-flyers like Nortel, but there are very many stocks that may be a long way ahead of themselves.