The basic call coming from EW analysis, my version and that from others,was that from 2007 the market should drop and lose 50/60% of its value. Well before the lows in March of 2009 the bearish scenario became very bullish as it called for a retracement of the previous drop of , again, 50/60%. So in total the call was correct for the first 11000 points. Then the market charged on for another 2000 so far which EW did not , unfortunately , anticipate. As seeing your neighbor making money while you are treading water or worse, is extremely painful and this could pull the hesitant investor into the game, which is no doubt what the market wants. But there are a few good reasons not to buy now! 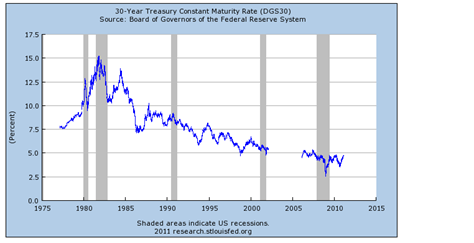 In the top chart is the TSE and beneath it the 30-year US treasury in yield terms. I use the US rather than the Canadian as it is much easier to find and the Canadian one would actually amplify the point as our rates travelled a wider range. The point being made here is that the two are highly correlated through the “discount factor” discussed elsewhere in this blog. All you have to do is turn the bottom chart around so that you are looking at it from the back (SeitenVerkehrt). and the correlation is startling. Even the numbers are almost proportionate. Also the individual swings get bigger as the numbers get bigger and v.v.. All this of course does, is anecdotally demonstrate that interest rates are a huge factor in determining stock prices. With a 1.6 trillion deficit how much lower and for how long can the US keep this up (down)?

Looking at the top chart, the green arrows marked X,Y and Z, all 3 drawn vector equal, show that the up leg from the March low is now equal to the leg up into the tech stock bubble of 2000. As of today this is the fastest up move in the 150 year history of the TSE, travelling more in less than 2 years than it did in the first 145 years of its existence! But it does not have to stop here. The next level is where c=a (of the B-wave)at around 14400 (all numbers are monthly!), the parallel trend-line is a few hundred points higher. Then comes the old high at 15000 followed by 16500 where this leg would be vector equal to the preceding two. In between are slightly different levels (light blue) where the vertical distance is equal. The point is that out of the 5 or 6 possible ending levels, the very highest one is at “only” 16500 or about another 2500 points or roughly 18%. All others are much closer.So to get in now to get, say an extra 10% by possible risking 60% is not a good proposition.But then this call could also be wrong!!

By the way, the TMX group (X) itself, has been declared a strategic asset so that take-over/merger is dead on arrival.