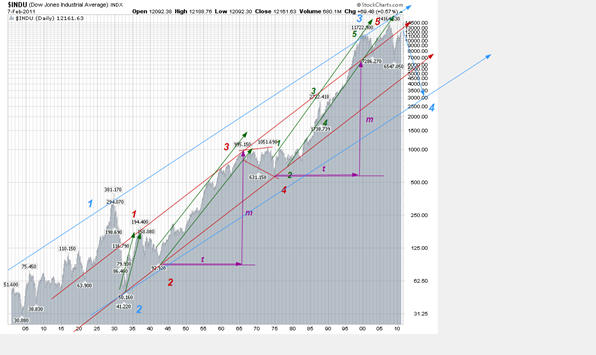 Just as I was making this chart an e-mail came in to inform me that Mr. Prechter had added 2 pages to his “Theorist” publication that came out 2 days ago. As I do not wish to be accused of plagiarism  I will happily acknowledge that it is Mr. Prechter’s observation that in the last cycle degree up-move the Dow worked itself against the trend-line before falling into the 2009 low (in green at the top on my chart). He further points out that we are about to do the same thing again but against the super cycle degree trend-line (in red). All of this in the context of this being a bear market and not the start of a new bull trend.

I have a few observations that he does not mention. The red lines define the super cycle degree up leg from the 1929 lows. There are 3 up legs (in green) as there should be. Wave 4 is not surprisingly a megaphone or, in the more proper vernacular of the E-wavers, an expanding triangle. Notice that waves 3 and 5 are perfectly equal , in both time and magnitude ( on semi-log scale) if the graph had stayed between the parallel trend-lines. In reality it had a throw-over caused by the tech bubble and then another bubble in 2008 (top of B-wave), both undoubtedly caused by the Fed, which is now working hard on the third one! The fact that we were above the line is a measure of how over-extended the Dow really  is. Now we are  a few days away from hitting that line again. (at about 12400).

A logical first and possible only low in the next few years, say 2016 would be around 3000. See light blue trend-line.