Biovale and Valeant merged in 2009, much to the chagrin of  the , larger than life, founder Eugene Melnyk . After  sordid allegations of accounting irregularities and lots of negative publicity, courtesy 60 minutes etc. ,  the company needed  to rebrand itself and it chose the merger and name change to achieve that goal. We all know the story of the pig and the hen that decide to merge and go into the business of selling bacon and eggs ; one of the two parties always dies in the process. In this case Mr. Melnyk confidently stated that the “business models of both companies were fundamentally broken” and that he would not want to own the stock four years from now. Half that time has passed, and the stock is up four-fold after announcing (today) another take-over, this time of privately held Swiss Pharma. Sour grapes perhaps? Here are the charts. 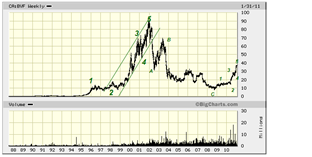 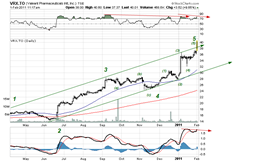 Looking at the Bigchart (still available under the ticker BVF) , it is clear that the stock completed the 5-wave ride up to $90 or so, followed, predictable, by a dramatic drop to about $7 (I already liked it at $16, too early as usual!). The drop appears to be an A-B-C (actually an a-b-c-X-a-b-c). The first logical rebound target is at about $32, than about $50, $58 and $70, wave 4, 50%, 62% and B-wave level respectively. We have no idea which it will be, but it is already possible to count 5 waves up and we have reached a one year target  ($41) at a very astute investment dealer already , which, by the way, has the stock on its Focus List (see elsewhere). We would recommend a very tight stop if you own this. Just remember Juliet’s words to Romeo; “That which we call a rose, by any other name would smell as sweet.”