In the good old days owning an American Express card was like joining the financial aristocracy , never mind that you were just a nouveau riche or had robbed a bank. You sort of got the green card by invitation. It was one of the first and followed in the footsteps of the Diners Card that had an even greater snob appeal.  Today things are a little different. In Canada you can chose between at least 20 different cards. Depending on your needs, dividends, air-miles, insurance against breakage, buying at Costco there is a card for everyone and you only need a $20,000 income. The fee is $55 a year, there is no PRE SET limit and the interest rate is a mere 30% per annum?, or calculated in an opaque way using some sort of fifo system? Anyway that is still under the official usury rate.

By the way, the usury rate in the US is under the jurisdiction of the individual states and is typically set at about 5% above the Fed funds rate. However in 1980 as a result of the inflation then,  a federal law called the “Depository Institutions Deregulation and Monetary Control Act” very conveniently exempted most financial institutions from State usury laws. In Canada the matter of usury is dealt with by the federal Criminal Code under section 347, which allows for rates of 60% (yes sixty!) per annum and for juicing them up by additional fees. Why we do not tighten these rules up a little is beyond me, I guess both here and in the US we just love our banks. Dante ,in his inferno, had a somewhat better take on the matter, putting usurers in the 7th circle of hell, out of nine ,  together with blasphemers and sodomites who, back then, were truly bad characters.

In early 2009 this was a great stock to buy, see charts below; 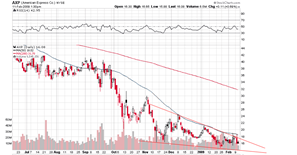 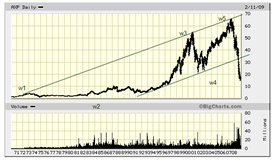 At the time (see my blog, tag AXP) I recommended a buy at under $10, which it actually reached. If you still own it I would suggest it is a sell now; 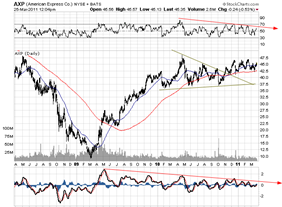 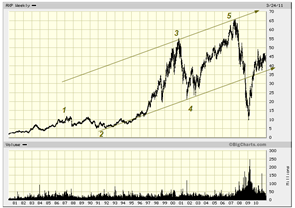 I have no idea what the correct count is. This could be a b-wave just as easily as a wave one in a new bull market. What is clear is that in both those scenarios a pretty substantial retracement would be due at this time,it was up about 75%. The stock made a high almost a year ago and just cannot work its way higher. RSI and MACD are also non confirming. In the past 30 years there were only 3 years that the stock traded higher than it is today. I would take the four bagger and run.