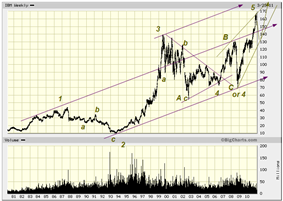 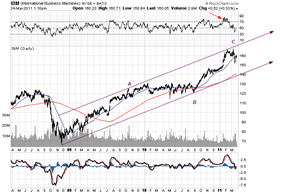 Back in the early 1990-ties , as a new stock-broker , I got a shareholders list that had a few hundred names on it. I called every single one , within a certain distance , to warn them that their stock would drop rather precipitously. Not a single one would even listen! Today, if anyone remembers, they no doubt praise themselves for being long-term investors. Then the stock did drop by about 60%.

Today, once again, we are at a similar point. I think the stock is a sell and could easily drop $100 or thereabouts. This has nothing to do with this either being a good or bad stock, it is simple the market.   The climb from about $70 to $170 is steeper even than the climb during the tech bubble years. The count itself is a little ambiguous. If you torture things a little you could squeeze in a wave 4 triangle, and start a wedge formation from there. This would allow the stock to climb higher ( to about $190) but not before first dropping to about $130., leaving you ample time to react. A better count would be along the General Electric lines, a large A-B-C wave 4 spread over about 10 years (with a failure as no new low is made) , followed by the recent up-leg as wave 5, or if you shift the tops to the left as wave B. The short term chart certainly supports the idea that this is a wave B.

In short this stock is a sell. I should mention that I never thought this one would trade above $130 so I have been wrong on this one a few times. Also the P/E at around 13 is not particular high!