One can always count on the French to add a little elegance to a situation. This is the CAC forty and as European stock exchanges go, it is somewhere in the middle of the lot, well above Amsterdam but well below Frankfurt. Here is the chart; 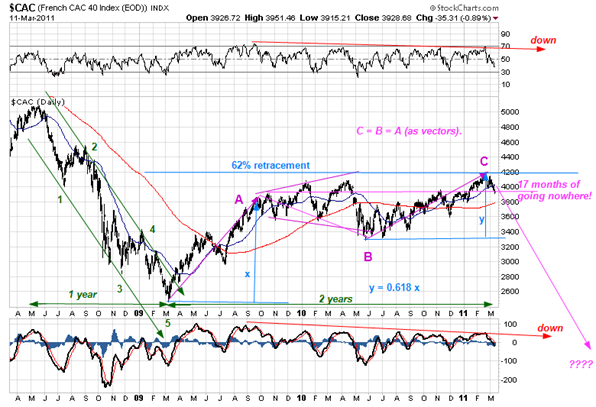 This is almost as nice as listening to Edith Piaff sing “Non, je ne regrette rien”. Except, that with the benefit of hindsight, I certainly do regret getting the timing wrong on this retracement, not just the CAC but all of them. Notice that the drop into the lows of March took about a year. Given that it was reasonable to expect a retracement that would last about half as long or , at the worst, equally long (this is normal for counter-trends). Instead it took exactly twice as long, mostly courtesy the US Fed with QE2. But despite this meddling EW still seems to apply very gracefully, with the notable exception of the, somewhat awkward ,“megaphone” in the middle . Note that the recent high is a near perfect 62%. Note that C=B=A as vectors and that C travels about 61% as far as A. In addition both the RSI and MACD are dropping for quite some time.

Still life has not been all that rosy for either bulls or bears. After the first 6/7 months of retracement this market, as of today, is pretty well where it was 17 months ago giving new meaning to the old adage timing is everything. Now might just be the right time to try the short side again.