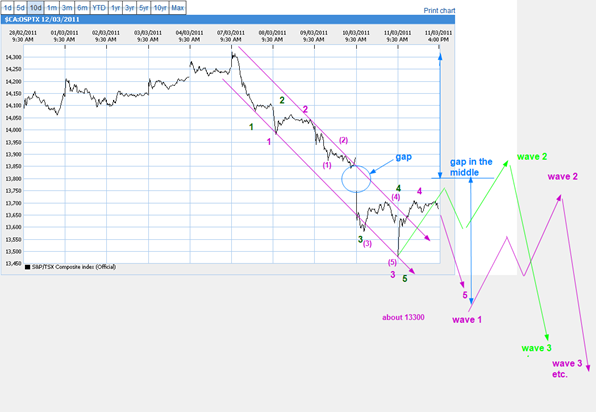 This was a strange week. China’s export machine stuttered, Gadaffi won’t go away, confidence dropped and employment was less encouraging and then we get the Japan situation. Every time I have tried to analyze the TSE it does not do what I expect. Here we go again.

The drop so far appears to be 5-waves (in green) and now we should go up in an a-b-c with much of a complete. This is the simple 5-wave scenario. I prefer the purple one. The Canadian market loves doing one thousand points and we have not yet done that. Secondly , there is a gap. Often gaps occur in the middle and if that is going to be the case we need to go to about 13300, satisfying both conditions.      After wave 2 is complete we should at the very least get wave 3 or C of the correction. Of course we are probable correcting the 7 month persistent 3000 point rise from August, if not the whole thing from March 2009. In fact this may not be a correction at all. Instead it may be a continuation of the bear market from either 2000 or 2008. It is too early to jump to that conclusion.