My attention was drawn to this company by chance, as I do not know anything about them , but after having confirmed that they operate in Africa , are in the mining business and prefer Latin to Afrikaans , no doubt to add a little veneer of sophistication to their name , I am just a wee bit suspicious. Looking at the chart I would sell NOW, at this very moment without the slightest hesitation. Here is that chart; 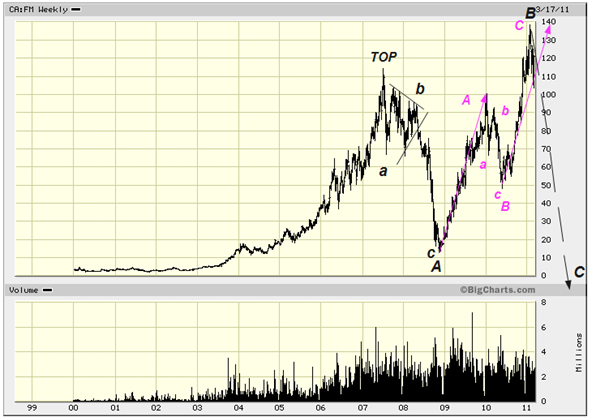 This is a very rare example of a near perfect B-wave, an irregular B-wave to be a bit more precise. This is the ONLY correction within the EW approach that is allowed to rise above its starting point. This is counter-intuitive as one might argue that it is then not a correction, but in this case EW looks more at the nature (it is way more bullish than a bull market and therefore must be a bear) of the thing than the distance travelled. In any case these B-waves, like all others must consist of 3-waves and should not go much more than 30% or so above the preceding top. Typically they constitute the mid-wave of a “flat” (but can ,occasionally, become irregular triangles), having essentially a 3-3-5 structure where the first 3 is the A, the second 3 the B-wave, and the last 5 the C wave to follow and complete this whole thing. 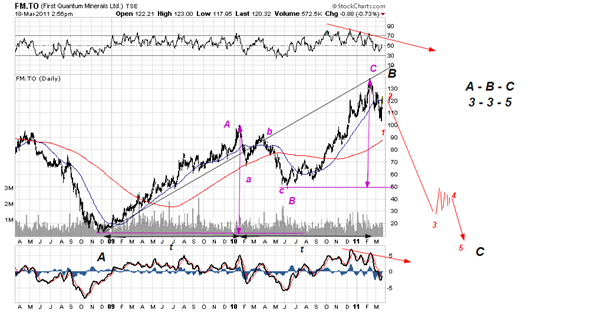 Notice that the construct of the B-wave is balanced and symmetric. These pretty ones are fairly rare. Loewen, the funeral home guys had a real beauty just before it got pulverized by a Mississippi  court judge ; Merck had one right in the peak of 1999. They do not occur often but when they do they are highly reliable. This one is going to a new low.