All day I watched CNBC and other programs and I am totally amazed at the generally cavalier attitude displayed by some of the talking heads who, in some cases, are even apologetic .

Here are the long and short term charts; 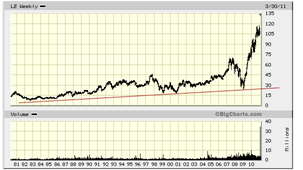 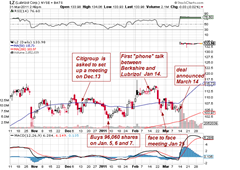 I know absolutely nothing about this company other than that it makes lubricants. Not a business that is generally expected to take-off. But it has from $30 to $135 (that is the bid by Berkshire). Makes you wonder if the sage of Omaha is still the Graham & Dodd “buy low and never sell” type of guy, but that is a whole different matter. So this crown prince successor in waiting buys a few shares , 96,060 to be exact, over three days Jan 4, 5 and 6 after he initiated a contact with Citigroup that took place about a fortnight earlier. Actual contact takes place, first by phone on Jan 14 and (a week after purchase) and again on Jan 25. The deal is announced two months later.  This fellow is quite wealthy having sold his company to Berkshire and over the last 10 years or so having earned about $56 mln. Evenso how often is an order by an individual entered for $10mln in XYZ share? Not very often. Why at that point in time as the stock had been a lot cheaper earlier. The 3 mln profit is peanuts compared to what could have been earned if the timing was a little better, that is the market timing, not the timing dead smack in the middle between the initiation of the process and the first talks! We will get some very sophisticated arguments in the next few days to explain away this unfortunate mishap. Personally I would be just a little agnostic.