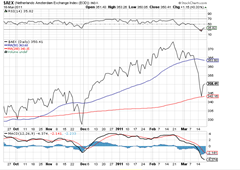 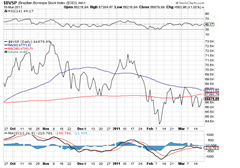 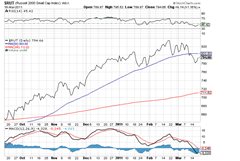 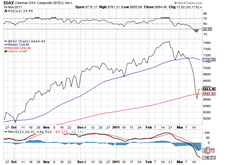 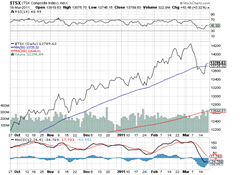 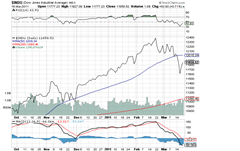 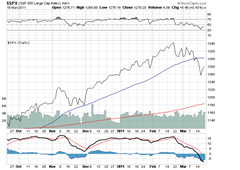 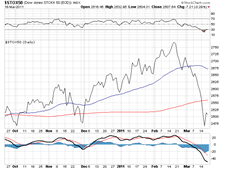 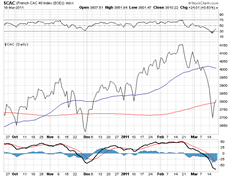 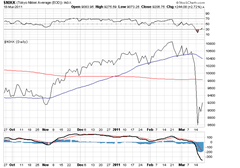 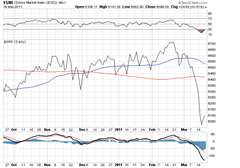 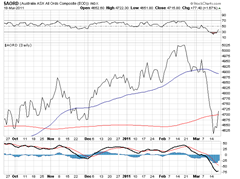 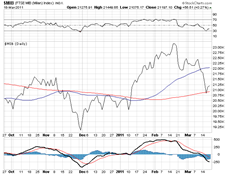 Above are charts of 14 different indices , Italy, Holland, Switzerland, France , Germany, the DJ, the Russell2000, Brazil, Australia, England, Japan’s Nikkei and the Stoxx50, not in that order. I have deliberately used a different chart setting that is less articulate, more like what you get in the papers. This has the effect of smoothing things out a bit and making it easier to count. The one thing that is immediately clear is that they are all going in the same direction. Furthermore at least 10 out of 14 appear to be 3 wave affaires, not 5. This means that we are either in a wave 4 to be followed by a  new low for 5, or we are not going to get that and we are simple not yet in a bear market.

The Bovespa, (#3) looks much more like an a-b-c completed correction, ready to go to a new high. The Russell2000 (#4) is less pronounced but seems to want to say the same thing. The fellows in Milan are straddling the fence, either up or down is possible from here.

The TSX is fairly unique in this parade in that it can be counted as 5 waves down (see previous, more detailed blogs). But that still may not define a new impulse wave down as the leg up before it is not 5 but 6 waves and consequently the following 5 wave down could simple be a c of a larger irregular a-b-c. Canada with a minority “Harper Government” has been creeping towards a republic as opposed to a parliamentary democracy , and a few sordid little scandals involving doctored papers, 22 year escort girls and a rather dismissive attitude by our own Berlusconi may just be a little too much for the average Canadian, who patently lacks the savoir vivre of his latin counterpart. This government could fall in the coming weeks, which is fine except that there is no real alternative. This could become a game of Russian roulette with not one but three chambers loaded. (Our outlook on the Can$ also suggest a big problem around the corner, see a few blogs ago)

The last few months have revealed so many B waves that I am very much of the opinion that this market is ready to go south in a hurry. But I would just wait a week , perhaps two , to see if by some miracle this market still has an up-leg in it.

The charts may be difficult to read, but by putting your cursor on an individual one it will tell you what it is, by clicking it will enlarge itself)