Here is the TSX again, just as a reminder where we are in the big picture. 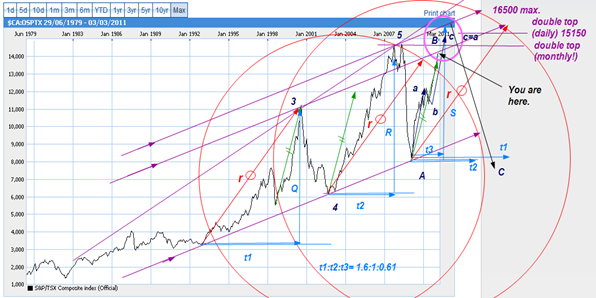 According to Bloomberg/Businessweek the S&P, based on one measure of volatility, hasn’t risen this much amid price swings this narrow since 1971. We had ourselves observed earlier that the TSX had never in it’s entire history, had an absolute move this size, and that was a hundred points ago.

This alone should be a warning that things may just be a little ahead of themselves. The Fed. has been behind much of this by way of QE2 and more importantly coercing the market .Their word has been gobbled up like gospel, but in the end they are powerless to change market forces. So, where are we now on the TSX? Here is the same chart of a few weeks ago updated to today. I am , of course, surprised that we got above the 12000 level, but now that we are here it is good to see where this might go. The purple circle in the above chart represents a “cluster” of different measurements that could ultimately determine where this is going, that is if the whole thing is not already turning today. The cluster consists of:

7. The next higher point would be where waves 5 and B are vector equal at 16500 if straight up. More logical would be to have some time go by which would lower that point (move along the red circle). This is highly unlikely as the intersection of the red circle with either parallel trend-line is at least 2 years away! To make a long story short, this market realistically has 7% max. to the upside. Time to buy HXD.

Without all the clutter, here is the DOW as well. 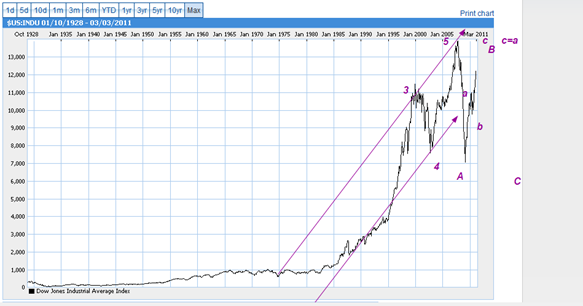 Notice that of the , give or take, 70 years that is covered by this chart all of 1 1/2 were spent at levels higher than we are today.