Rather than show 10 or so different stock exchange performances – the AEX as one of the worst and the DAX as one of the best – it is easier to look at the World Index as all indexes have the same pattern even though they differ a lot in absolute performance. A look at the Dow Jones European index more or less  confirms the view all though it contains only European companies; 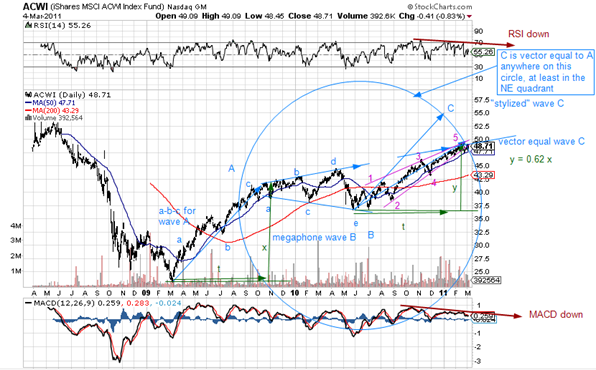 The point here is to look at the pattern, nothing more. If it can be viewed as a B-wave correction from the lows, it follows that either the corrective process will become a lot more complex (for instance in a huge triangle or flat lasting a number of years more), or we go straight down to complete the correction. If it can be viewed as a 5-wave move, or one that may still become a 5-wave move, things would look a lot more positive.

In my opinion this is a B-wave, plain and simple. Moreover it is either complete already or has at best another month or so to go.  First of all C is vector equal to A, and, with just a minor change in the count all three, A,B and C are equal in length. C is a rather precise 62 % of a in terms of distance. Wave C could be viewed as a “wedge”, a structure that only occurs in 5th or C-waves. The retracement is well above the more normal 50 to 62% at about 76%, but that is fine even if it is unreasonable to assume such a level in advance. Both RSI and MACD are non confirming. The B wave in this structure is a very nicely formed “megaphone”, or in EW lingo an expanding triangle. These occur only in the 4th wave or in the B wave position. Ergo, even if this whole thing proves to be a 5-wave affaire, after the fact, in all probability we still need to do a wave 2 down first (to 37, or about 20%), so initially the assumption of this being a B wave will serve you well even if it is incorrect.

Just to compare it is worth looking at the DJ Stoxx50 index, similar to the world index but covering Europe only; 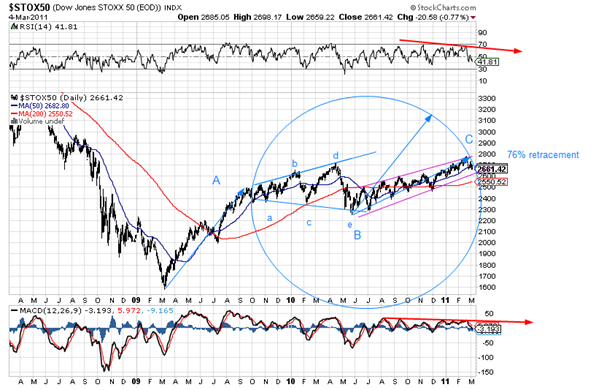 Remember that by clicking on the chart it becomes larger AND you can move it around to put the charts side by side for a better comparison. Clearly the two are essentially identical, the only real difference is that the Stoxx is less robust  having barely gained anything over an entire year. Of course Europe has benefitted less from Bernanke’s largesse and also has suffered not just as a result of the  well circumscribed financial implosion, but also had to deal with a “constitutional” near death situation.

In my opinion this is a B-wave so we should start to go down, if not right now, very soon. I have added the TSE for completeness. It lacks the clear megaphone and has outperformed the other two (commodities) but otherwise it too is identical as are at least another dozen indices. 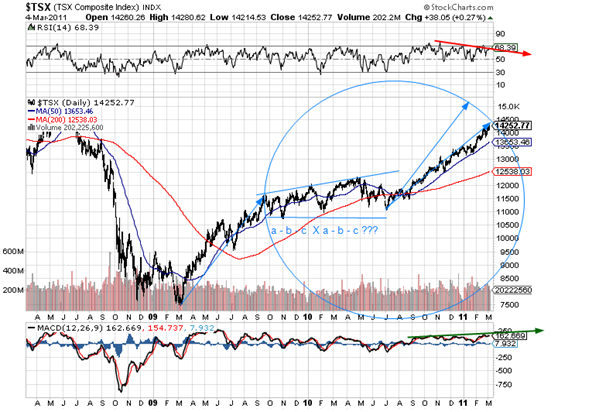 On Aug 3, 2011, I unfortunately rejected this possibility, primarily because of the time factor, here is that chart. The A wave is drawn incorrectly but otherwise it was dead on, but no banana! Keep in mind that the chart below is on a semi-log scale, the one above is not. 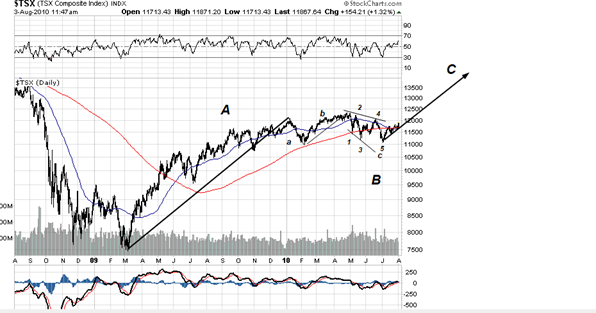