We did very well with this stock. Bought it at the low and sold it at $17+ for  a threefold increase. Then we forgot to look at it again which is rather unfortunate as the stock behaved in a very predictable fashion. Here are the charts; 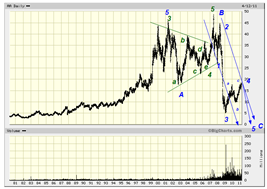 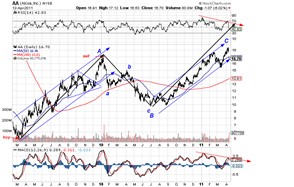 It is by no means clear if the first or the second top was THE top. In the latter case (green) a multi-year triangle as a 4th wave fits between the two tops. In the former case (blue) the “orthodox” top is the first one with a large B-wave creating the second top. Fortunately, for the moment at least, it does not make one iota difference which interpretation is correct as in either case the big drop following should be 5 waves. Today we may have completed a 4th wave in the form of a nice A-B-C. It is still possible that the C leg could go a dollar or two higher but I doubt it. It is quite amazing that this stock added so little over the year and a bit after we sold. Perhaps it was less inclined to partake in the intoxicating punch-bowl served by the Fed, as indeed it’s ticker symbol would suggest. In any case it should go to a new low. By the way the P/E is running at about 77!