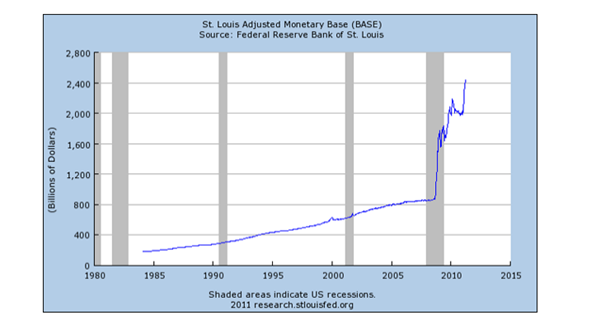 The world is awash in money. The above chart gives some idea how much and this is not the half of it. If Fannie and Freddie etc. etc. are included we get to about 7 trillion in the last year or two. On top of that every other country added to the pool. The Saudi’s gave away 130 bln to appease their underlings, the Chinese , Brits and Europeans all did their own stimulus packages and added sizeable budget deficits on top of that and, if all that did not work , kept interest rates nominally at zero or below for over 7/8 years now. Add to that a new war on top of two unfinished ones and the “potential” of QE3 if QE2 does not do the job.

Old fashioned people might be inclined to believe that this would all lead to inflation , especially if you  were inundated with the monetarist theories of Friedman et al , but that is solved to a large extent by officially cooking the books as the chart below, courtesy ShadowStats demonstrates; 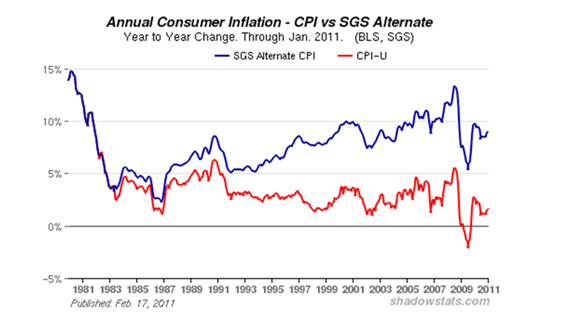 According to these fellows the CPI is closer to 9% than the 2% usually reported. Same distortions apply to the employment stats.

So on what basis are otherwise intelligent people like Bernanke, Greenspan et. al doing all this in the hope that it will work? The answer is Keynes. Keynes wrote  his “General Theory” in the wake of the great depression and due to his charming and domineering character and the simple fact that virtually nobody ever read his Theory, persuaded the world at large of his superior economic insights despite  the obvious lack of scientific integrity.  Today what might best be described as his flat-earth theories still carry weight in academia and once his quack system is exposed for what it is, this whole house of cards will fall apart.( see Where Keynes went wrong, by Hunter Lewis

Without unduly elaborating on his theories I will give just one example. Keynes did not believe that the price of money was set in the usual classical way where the demand (investments) and supply (savings) intersected. The resulting interest rate was there to compensate for the postponement of gratification. Keynes did not buy into this rather generic economic concept and instead postulated out of thin air that the only reason for interest rates to exist was to compensate , or measure,  our degree of disquietude. From that it follows that , in a utopian situation where there are no concerns by definition , interest rates should be zero. This idiotic approach leads to the intolerable fact that an apple today is worth exactly as much as one a year from now. Put another way, everything will have an infinite value. It is this kind of false and nonsensical theory the the Fed just loves, that is un till they too find out that the world is round.