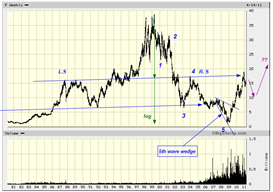 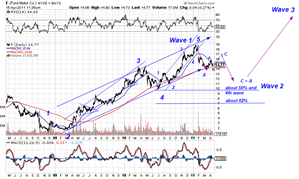 By special request a quick update on Ford. After retracing the wedge to about $10 the stock proceeded to go on to $19. This is where the 4th wave of previous degree resides and therefore a very “logical” target. At that point it had , at least under one count, completed a 5-wave bull up-leg for a wave 1 of a new phase in the life of this stock (one hopes).

So far, see detailed chart, the stock has gone down in a nice 5 wave move and therefore needs another 5 wave move to complete its correction, but not before an intervening a-b-c is complete. My best guess here is that we still need to do the c part, to , say , $17 or so and only then will we get the next bigger leg down to complete the correction. A logical target, as always, is the 4th of previous degree, in this case $10 but it certainly could go further.

In the long run it is hard to even guess how high the stock might go. Intuitively I doubt very much that it will ever again go beyond $25 or so. This industry is barely a hundred years old but seems destined to experience some rather major changes in the not to distant future with way more competition than ever before. The Americans still seem emotionally hell bent on building cars by taking two railway rails and putting a 560 cubic inch engine between them , which does not put them in the front row for innovation .