Ever been to Burkino Faso? It is in West Africa and one of these hell-holes comparable to the Congo. They have a lot of stuff there including gold and this company digs it up. Recently it reported a 9% decrease in production but in the meantime the stock has dropped about 50% even though there sales price at $1400 is substantially higher from previous results.  Go figure. The charts tell us this is a buy, soon; 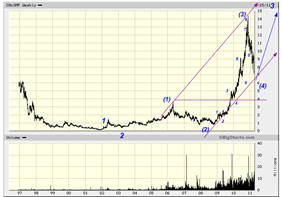 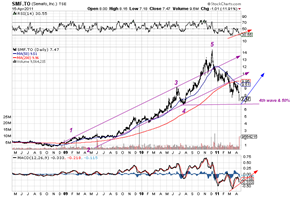 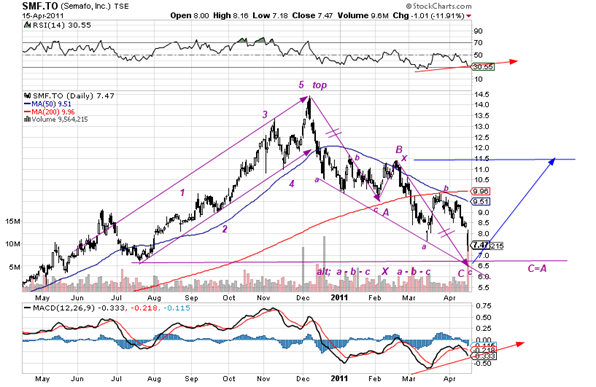 We chose 3 charts this time, large, medium and small. From the Bigchart it is clear that this stock, like so many others in this space has had an explosive run for the last two years. An excellent reminder that one should always buy the worst stocks and not the American Barricks , Goldcorp’s and Kinrossis, but choosing the right one is not that easy. Anyway, moving on to the medium chart a nice % waves up CAN be counted (same as 9 in B-chart). I acknowledge right away that this may not be a correct count,  but given all the other facts it does make sense. Ergo we are now in a correction of sorts. These do a number of things; drop about 50/60%, drop into the area of wave 4 of previous degree, do so in an a-b-c three-wave structure, in which c is often equal to a. It is  doing all of these! On top of that the RSI and MACD are not confirming the new lows so perhaps a turn is around the corner.

Should it turn at about these levels the next target price would be around $11.5 so if you pick it up at about $6.75 you would end with a handsome profit.