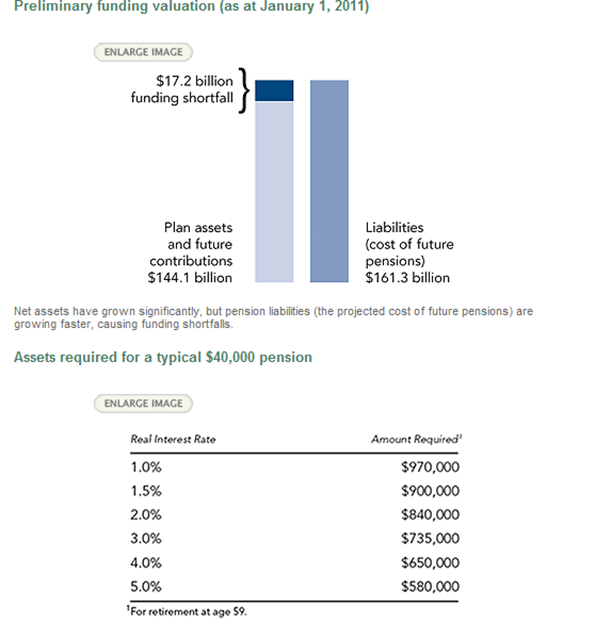 This is from their website. They earned a return of 14.3% last year, better than their benchmark by about 4.5% and the best year ever. Yet they are loosing out as their liabilities continue to grow faster. The shortfall is now around $17 bln  That is relatively good compared to their US counterparts. CalSTERS, California State Teachers Retirement System has an actuarial shortfall of 56 bln on 146.4 bln and Calpers, the biggest one lost about 100bln , from 260 to 160bln as a result of the recent Great Recession but has managed to come back to about 225bln.

Originally government pension  plans were essentially Ponzi schemes, that is the expectation was that X people would consistently contribute and Y people would draw on the system. When this works no funding at all is required but the problem becomes structural when X decreases and Y increases. If you want to pay retirees 1/2 of their salary and want to charge each still active participant no more than 10% it follows that X must be larger than 5xY at all times to keep the game going. These unfunded pension plans will soon blow up.

When the plan is funded things are far less dire as in theory you pay into the system what you later will take out. Payments are typically based on contributions so promotions during the last few working years have less impact. Still there is a huge structural problem in that demographics have changed considerable and this poses enormous challenges. In the case of OTPP the average teacher works for 26 years and then retires and lives another 30 years, and as there are also survivor benefits the actual payout period is invariable longer than that.

The other problem is that of returns. Markets do not deliver 20% returns just because you want them or need them. In fact , all these large pension funds cannot really outperform consistently as they , collectively , are the market (or at least a good part of it). The norm nowadays is to have a mix of assets roughly along the 60-40% equities and bonds line, abstracting from the alternative investments. Courtesy of our Central bankers the return on the bond side is dropping like a stone with each roll-over. At the same time the actuarial present value of the future liabilities rises rather dramatically as the above table demonstrates. The table does not include interest rates of 7, 8 , or 9% or anything higher, but the effect is exponential, not linear. Even so going from , say , 5% to 2% adds $260,000 to the cost of retirement.

If you are not on a plan the easiest way to calculate the cost of a similar plan is to buy a joint-last-to-die annuity at age 65 from an insurance company. That way you include the features of mortality and survivorship just like with a real  plan. Today such an annuity would cost approximately $100,000 for $450 in income per month. (at age 59 it is a lot less). To earn $40,000 per annum you would have to pay $741,000.

This is the other side of the coin , with interest rates so low. We continue to promote the misallocation of capital which invariable leads to large losses AND we will have to bail out pension funds directly or provide more support to the poor in our population. For my part I would happily settle for 6/7%.