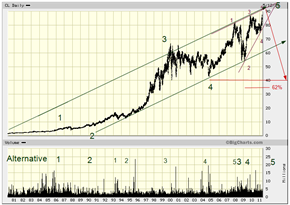 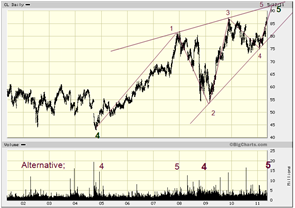 Colgate was up more than $2 today. As expected it is increasing the speed at which it is looking to get to the ultimate target. As indicated earlier two counts are plausible. Most elegant of the two is the notion that we are in a 5th wave wedge, now in its 7th year. This is because of the overlap that has occurred. A very plausible alternative would be a 1-2, 1-2 start which then requires a 4-5, 4-5 finish to complete the 30 year 5 wave sequence.

There may well be good reasons to prefer one count over the other but it is purely academic as BOTH counts call for a fairly drastic drop at the very least to $55, but more likely $45 or even $35 where the 62% retracement level lies. By the way, this is not a bearish call, just one that recognizes the normal ebb and flow of stock cycles.

Some may wonder why , if you expect the stock to go up by about $10 or a little more than 10% you do not recommend buying it. The simple answer is that I do not like playing 5th waves from the long side. The new high may only be marginal and the risk is at its highest!