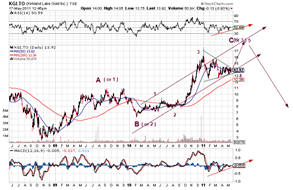 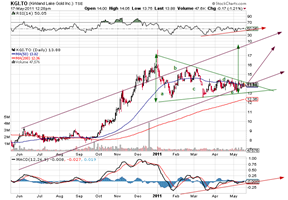 Being rather agnostic about the entire gold sector I try to be as objective as possible. Here is a stock that may well go up over the next few months. RSI and MACD are both positive and the stock appears to have traced out a nice triangle which could  be in the 4th wave position. If correct the stock should rise to about $17/$18.On a log-scale the A and C legs would be about equal, each having tripled more or less. Triangles can also be in B-wave positions and therefore a stop-loss should be used (at about $13) 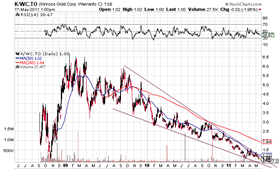 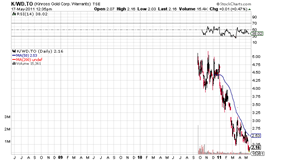 One of my faithful readers mentioned that there is also a warrant d on Kinross which might be a better buy than the c warrant as it has a longer term to expiry. I would agree that the longer life of the warrant improves the chances of getting a positive result. However this is a personal inclination and not necessarily a mathematically correct one. As with options generally you get what you pay for (not really) and the price at all strikes and expiry dates should properly reflect the risk/reward aspects. Short options can be done repeatedly for the price of a longer one. Similarly many out-of–the-money options can be bought for the same price as a deep in-the-money one. The choice is mostly a matter of preference.

I would prefer the d warrant as well but would never have seen the rather perfect “wedge” that is so visible on the c. You can buy 2x as many c warrants as d warrants and should the stock climb back to where it was last October the c would triple (from 1 to 3) whereas the d would grow by only 2.5x (from 2 to 5), all this assuming all other things being equal which they are not.