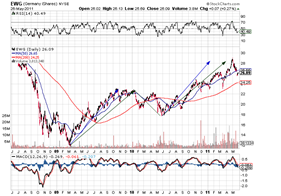 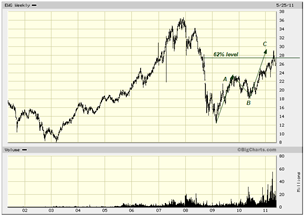 Germany and Holland have a lot of differences but economically they are attached in a way similar to Canada and the United States. Their economies are so intertwined that neither one can make policy without the other, granted obviously that the elephant always appears to get his way. Unbeknown to the world at large, Holland was once the largest energy producer in the world, relatively speaking ( it still is on a put-through basis ).  Gas in Friesland’s cow pastures propelled Holland into the  luxurious position of being able to run very large budget deficits with little concern; now known as the Dutch Disease. Canada is following the script pretty well and soon it will be known as the Canadian Disease. i.e. Alberta does well and Ontario suffers.

The above charts are of Germany’s EWG ETF. Clear, to me at least , is the A-B-C pattern of a wave 2, or at least some “corrective” move. For some reason, not sure what it is, the EWG differs markedly from the DAX. It has exceeded the 62% retracement, but barely. Below is Holland’s EWN (the AEX or Amsterdam Exchange is still far away from its top). You can click on the charts and out them beside each other. ; 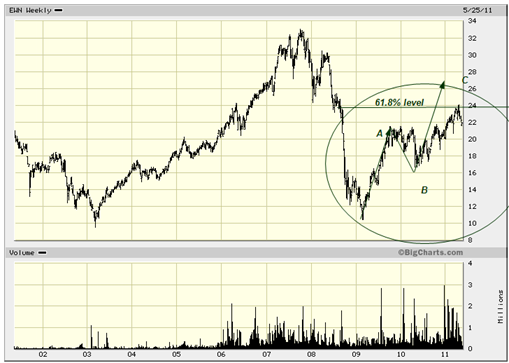 The correlation between the two ETFs is rather obvious. The EWN is even more precise in it’s retracement level, pretty well a perfect  62%. It could go higher in the event C equals A but there is no need for it to do so. For the moment I would prefer to be on the side lines!