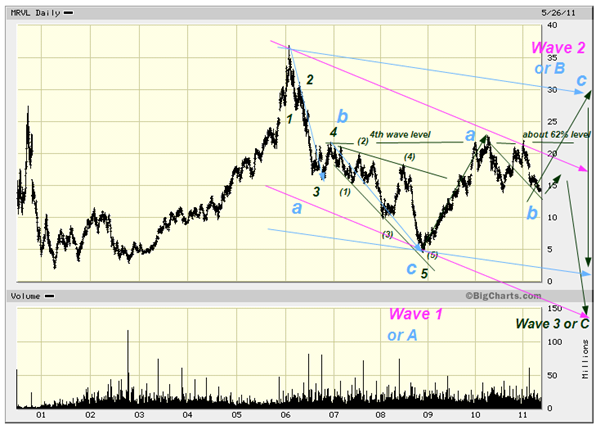 I have no idea what this company does, just happened to notice some very distinct patterns and it trades at a P/E of about 11, so from that perspective anything is possible. This stock has an unbelievable predilection for “diagonal triangles” either expanding or contracting. These patterns that are simple wedges are extremely reliable providing a pretty good predictive value; the art is recognizing them in real time.

On this bigchart the wedge is in the middle, from about $22 to below $5, just short of the lower trend-line (see Ford for another example). The wedge virtually guarantees a return to its origin which it promptly does. A level that also happens to be very close to the 61.8% retracement. These patterns can be either 5th waves or C waves which implies that the entire move down from $36 to $5 is  either a 5 wave sequence or an A-B-C. The 5 wave sequence would suggest that we are in a zig-zag requiring another wave down soon.The obvious problem with that is that it would lead to a negative stock value (see purple lines). With few exceptions, installment receipts being one of them, this is impossible so I would prefer the second option, that of an A-B-C (for wave A of a flat). The flat, as the name suggest, is a large pattern that goes nowhere after the initial leg defines its size. Typically it follows the A-B-C structure in which the A breaks down into an a-b-c, the B does the same and the C is a 1-2-3-4-5 sequence, as always. Given this possibility the stock could climb to about $30 to complete the B. The entire B leg would look like this; 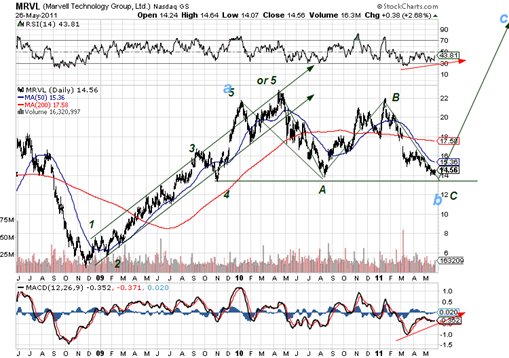 To complete the  (minor) leg c the stock still needs to drop slightly below $14 to finish its 5th wave and, by the way, complete a 50% retracement right into the 4th of previous degree! Then it should move up smartly. The RSI and MACD are already confirming a turn. In more detail we get the following; 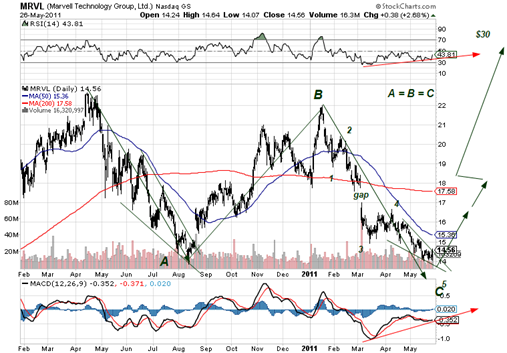 One can never be sure of the accuracy of such predictions, that is why a running stop-loss is highly recommended, not initially but after a few dollars of gains. Remember that smart people do not necessarily make the money, disciplined people do.