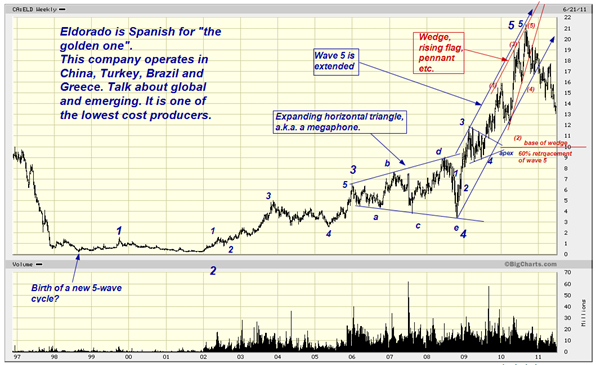 This stock has risen from a few cents to $21, precisely over the same time as gold had (or is having) its renaissance. In and of itself , this qualifies as a “bubble” of sorts. If so it is good to remember that all bubbles , without exception , were eventually reduced to their origins or below that!. This stock has already lost about 1/2 of its last leg up. Any time now it could have a very nice bounce but that would probable only be part of a much more complex correction.

I have an open mind, I think , with respect to the count, and realize that there are other possible counts. But the one thing that stands out in this chart is the very, very clear expanding triangle. These occur only in 4th (and B- ) wave positions, the question is 4 of 3 or 4 of the entire move up. As there is another , smaller contracting triangle right above it, I assume that the bigger of the two is of a higher degree and therefore is wave 4 of the entire move. This does make wave 5 much larger than normal, but where it comes to commodities it is quite normal for the 5th and not the 3d wave to be the extended one. All of this ultimately points to a stock that should trade down to $3 at least.

Further supporting  at least the direction, is that this is a low cost producer. Paradoxically, and this is counter-intuitive, the lower the cost the closer the correlation to the “stuff” itself. This makes sense if you consider that marginal miners benefit disproportionately from a rise in the price of gold. For some reason this did not apply to ELD, see next; 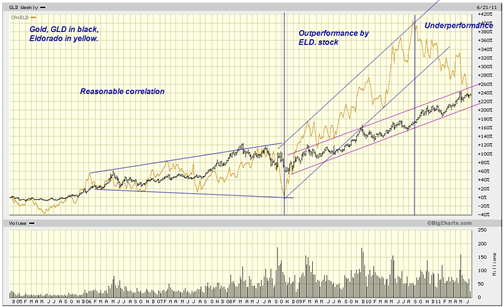 Until just recently, ELD outperformed gold (using GLD as a proxy) rising more than 400% against gold at 240%, a very large outperformance that has all but been erased over the past few months. But even now it is over-valued compared to the big boys; 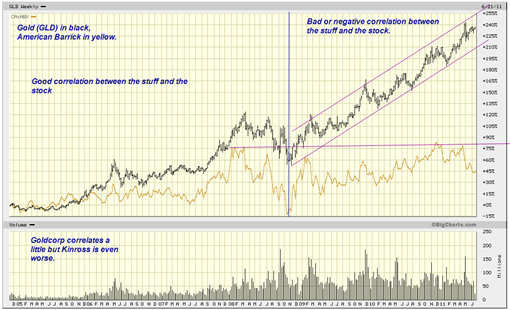 I have used ABX , which so far has underperformed by about 200%. I could have used Goldcorp or Kinross and the result would have been a little better and a lot worse respectively. Most of these too are low cost producers. Should Eldorado one day join this group its stock price would drop to $3 (where it would also underperform GLD by 200%). A bubble is invariable caused by a concentration of investment capital and this stock is aided in that sense by it’s very popularity with at least 20 analysts (????) following the stock.

Why gold stocks underperform the stuff by so much remains a bit of a mystery. Perhaps it is that you can now take “pure” positions in ETFs that were, until recently, not possible. This is cheaper and does away with the idiosyncratic attributes of individual stocks (think BRX).