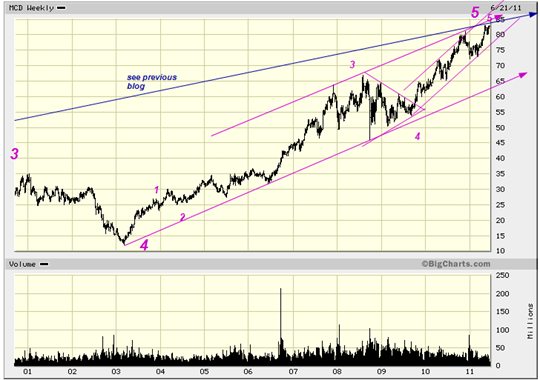 Back in February it looked like this one had peaked. It simple continued its rise and added , perhaps , another 2 to 3 dollars. The problem may come from viewing wave 4 as a triangle (there is a flash-crash entry on the chart that may not be real). If you shift wave 4 to the left, you need one more leg to complete wave 5 and that may well be what we have been getting. A drop to at least $50 is in the cards.

I listened to an analyst today who strongly believes this is the stock of the future. It derives only a small portion of its income from the US, most from Europe, and barely anything from China, but that is coming. As a very good reason to buy ,he mentioned that the company had measured a reduction in the time it takes to serve a hamburger from one year to the next. 6 seconds and that this represented 6x 1million on the bottom line. Being able to measure is not the same as being in control. Time will tell.