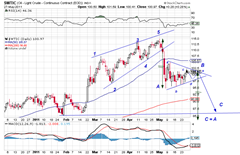 3 months ago (and before that) we warned that oil was going to take a beating. The chart above was unequivocal in its meaning – a very nice a-triangle b –c  in progress. Here are today’s charts. 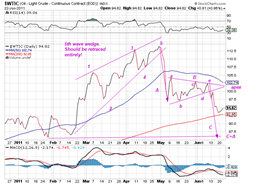 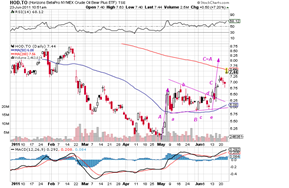 On the left is WTIC (continues futures contract for West Texas) and on the right I have added HOD (Horizons Betapro Oil Down 2x, the U is for Up). Being a bear ETF it should essentially resemble the other chart except that it should show twice the magnitude and be inverted.

WTIC targets, give or take, $85 which is where C=A, a normal and frequent occurrence. From about $115 to $85, if and when it gets there would be just shy of 30%. HOD, coming from $5 should therefore increase to about 1.6X 5=$8, where C is also equal to A. Paradoxically, should oil NOT drop that far, the situation could actually be much more bearish longer term. Also if these targets are met, it does not necessarily mean the end of the decline. A much more complex correction may be in the making.

Today’s drop is, prima facie, the result of the IEA (International Energy Agency ? )announcing a 60 mln. barrel injection into the system. Why now remains a little bit of a mystery considering the relative glut of the stuff. The US will contribute 40%, or so, to this endeavor by pumping the stuff out of it’s Strategic Reserves , another blatant example of a, probable illegal , use of assets in an attempt to distort market forces. Apparently this has been arranged for some time, no doubt with a little prodding from the Fed, always a champion of free markets unless inconvenient. Convoluted theories are already being presented to put a bullish spin on the situation.