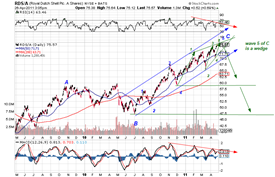 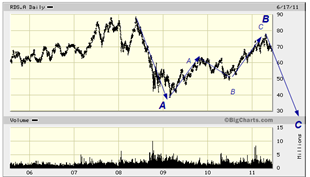 The left is an old chart from late April. It was one out of a number of charts that was loud and clear about the impending drop in oil prices. I repeat it here with the updated chart on the right to show , once again, what kind of a pounding oil could potentially take. Remember that the stuff dropped from $147.55 to $33 in less than a year, just two years ago., almost as if someone had indeed found a way to burn water.

Looking at Shell it there are to very distinct patterns, neither of which promise much good for the future. First , the move into the recent highs appears , quite clearly, to be a diagonal or wedge. These patterns are ending patterns and are invariable retraced to their base level, in this case under $60. Secondly,and this is equally clear in the Bigchart on the right, the move up from the March 2009 lows is, almost beyond a doubt, a B-wave (note the stylized blue arrows) in which the a and c components are about equal in time and magnitude. Consider further that , shy of $10 or so, the stock double-topped, all of which is the signature of a “flat”. This promises a drop in the C wave to a level below the start of A, in this case $33 or whatever it was. Should this happen energy stocks are going to have a pretty rough time to say the least.

There are a number of highly unlikely alternative scenarios that would prove this assessment wrong; we could be forming a huge triangle (still down to $50); we are in wave 4 of c and will move up to above $90 (after all we are running out of the stuff as in “peak oil”): this is just the first leg of a more complex correction up that will stop at about $50 and then continue back up, etc.etc. None of these are attractive alternatives so, in my view, it is best to have a low exposure to conventional energy companies. Perhaps superfluously , I should point out that I do not think Cameco (CCO) fits into this category.