I have suggested a pairs trade on this couple before. It was a complete disaster which is why stop-losses should be used whenever and wherever  possible. Stocks in these markets are often traded on momentum , that is that they are bought on the simple expectation that there will be a greater fool down the road. There is until there isn’t. NFLX seems to fall in this category.

As predicted, before the recent earnings came out, AAPL went through $400 in after-hours trade and today it did it during normal trading hours. RIM on the other hand announced that it will lay-off 2000 employees and is suffering from minor palace revolutions. The stock is in the doghouse. Here are the charts; 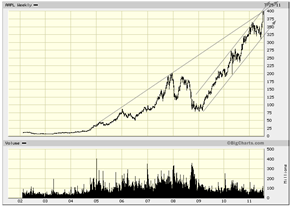 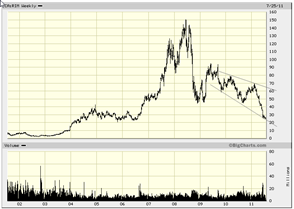 As you are aware from previous blogs, I think AAPL is topping and RIM is bottoming. For one thing AAPL is now worth over 300 bln, the second largest capitalization after XOM (Exon) at a little over 400 bln. However you slice it, it is difficult to make sense of that. RIM in the meantime is suffering from “confirmation bias”, according to David Olive in today’s Star. I had never heard of that term but I assume it is what you get when non-thinking people get together with like minded colleagues and go through the “misery loves company” exercise. We already know that stocks are the only thing that sells better at a higher price than a lower, but maybe this has gone too far. In the same article Olive gives the following facts; RIM outperforms Apple in return on equity 41.4% against 35.3%; in terms of R&D spending  RIM spends $1.4 bln or 6.8% of revenue for essentially a single product, Apple spends $1.8 bln or 2.7% of revenue on a multitude of products. Rim trades at a p/e of 4.5, Apple at 15.8. Rim has the ultimate security, Apple does not. Anyway , apart from fundamentals the chart tells the story. Here the two are combined; 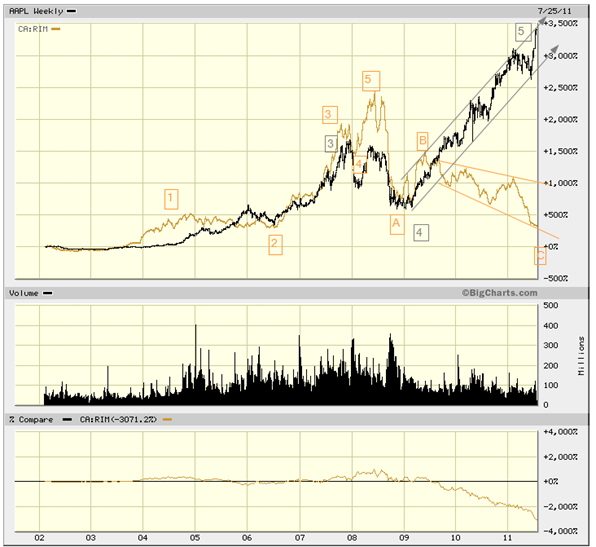 RIM is in beige and Apple in black. RIM has a count that supports the idea that it should go up from here. Apple  can be counted as having a top here. Most importantly is the difference which on BigCharts can be shown in the bottom window. Notice that for most of the past 10 years RIM consistently out-performed. That changes after 2009 1/2. The critical thing is the vertical distance between the two; it has never been wider! You can try the pairs trade again. Sell one AAPL and buy 8 RIM roughly, but keep a stop at whatever your tolerance is, 10%??