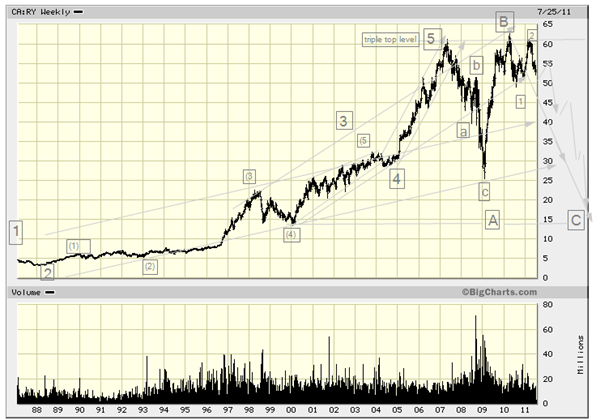 Most of the Royal’s moves we got more or less right, just did not expect it to double top. It earns you 4+% in dividends, has a p/e of just under 14 and if you ask any broker who has no idea what to do with your money, invariable the answer is to buy the banks and the royal is just the cream of the crop, it does not get better.

Except for one little fly in the ointment; have you ever wondered why the LCBO has never lost money? The answer is simple that it can not. It can overpay it’s employees, it can have disgraceful services in certain areas, it can do whatever it wants but as long as it has an inelastic product and a monopoly you cant lose. They Royal has the same privileges , except that it is the price-setter in an oligopoly. The place is run by a group of high-testosterone guys, from the original Dominion Securities that after becoming scared shitless in the 1987 scenario- roughly where this chart starts -  begged to be taken over only to invert the process from within. They did not even have to build a horse!

So recently, after trying so hard, they vacate the only culturally comparable environment, the US of A, and withdraw to home base. But , amazingly as it may be, they now have the honor of being elected to the very elite and select few of the banks that matter, the too big to fail group. Together with the TD they give a pathetic display that vacillates between wanting to be the biggest bully in the sand box, and not wanting to be in the box at all.

I like the Royal, they have this “right or wrong but never in doubt” approach. An admirable character trait, certainly when compared to the CIBC which has more of a “I-have-no-idea-what–I-am-doing-but business model.

The point is that these banks are exceptionally vulnerable. If we believe in globalism in Canada (we do not) , competition may get serious one of these days. This is true for communications and real estate services as well. From one day to the next the game changes, supposedly completely unpredictable and unexpectedly. Not so in EW terms. This stock looks pretty sick, and should it break down much more from here, as I suspect it will, $30 is most definitely a realistic possibility. Perhaps even a bit lower than that.