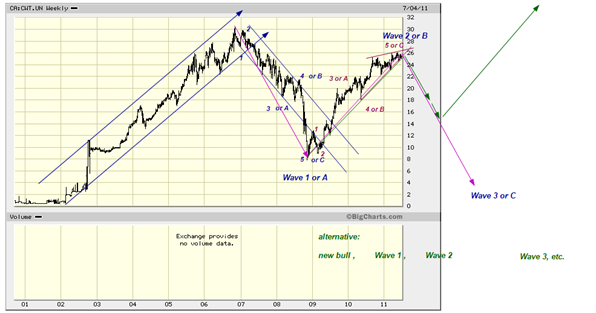 Calloway trades at a P/E of about 85, according to Bigcharts, yet it earns slightly more than 6% in distributions. No idea how well the fundamentals stack up , but IMO this one is pretty well priced to perfection, just as it was in ‘07.

EW wise there is some ambiguity in that the drop in ‘07/’09 could either be a 5-wave move or an A-B-C. But, either way the next significant move should be down by about $10 even in the optimistic scenario. There does not appear to be any real immediate upside all though some might argue that double-topping is just around the corner. In the highly unlikely situation that this actually happens only $4 would be added to the value of the stock, ergo the risk/reward ratio is very much against you. Sell or use a tight stop.