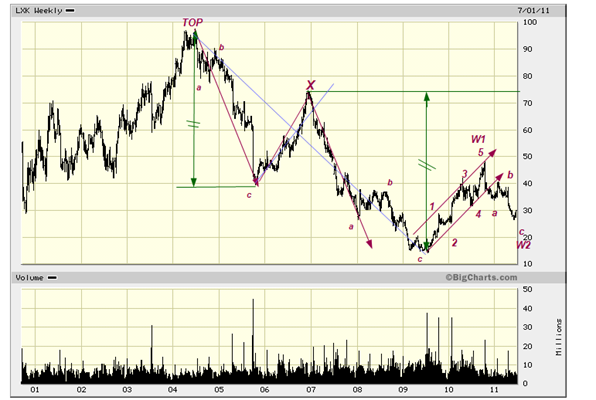 I could not get a longer chart to see what this stock did during the tech. bubble, so I am simple assuming that the near $100 high shown on this chart is THE high (by the way, another fitting example of the Mnt. Everest syndrome). From that top the stock corrected losing 77% of it’s value and did so a a very clear zig-zag, actually an a-b-c X a-b-c , in which the X retraces about 62 % of the first a-b-c. These patterns can repeat 3 times which would lead to an a-b-c X a-b-c Y a-b-c. More than 3 is not possible (stated more correctly, none have ever been found!) In this particular case it is highly unlikely , but not entirely impossible, that a third a-b-c is forthcoming . That would take the stock to $0 or below. So I assume that the $15 low is THE low. If so it follows that a new bull market started at that point. 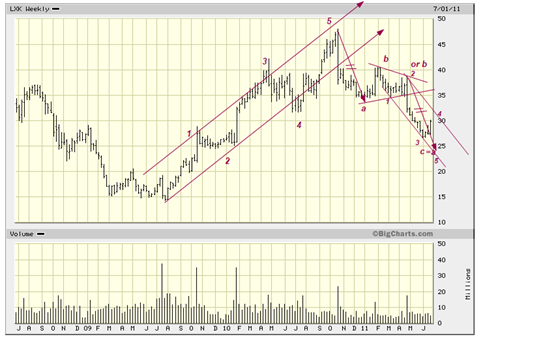 Notice that the low is not in synch the general market, it occurs 4 months later. If we are in a new bull we should see 5-waves up to start the process. This is wave 1 up of the new bull. Then we should get a (deep) correction for wave 2. So far we have an a-b-c down, but the c is probable not yet complete. An ideal target would be around $25 where c=a, 5-waves for c would be complete and wave 2 would have retraced about 62%. It does not have to do that but it might. If it does it should be a buy.

By the way, this computer hardware manufacturer trades at a P/E of about 7.