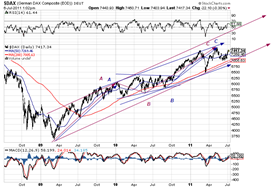 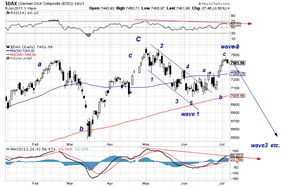 The German economy has, to some extent, been the beneficiary of much that has gone wrong in Europe as a whole. It’s status as the world’s largest exporter of, primarily price-inelastic durable goods and machinery, remains in tact even if China has overtaken them in sheer volume. It’s unemployment rate has been dropping now for some 20 years. Confidence is high etc. etc. Nevertheless from a charting perspective it looks as if the DAX has the same pattern as everywhere else, that is a large B-wave. Not very elegant and perhaps not very relevant to this point since it has retraced 90+% of the drop, but it is there.

Just a week or two ago the DAX was trading at levels that it had reached back in early December , so for about 7 months it had gone nowhere. Even at today’s level we are where we were in early Feb. , five moths ago. The latest gyrations may be attributed to Greece, going bust, being saved , going bust who knows. We still have Portugal, Spain,  and perhaps even Poland to contend with and nothing has even remotely been solved. With that backdrop counting the latest gyrations as a first wave down , followed by an a-b-c wave 2 up retracing most of the fall which is normal, is not that far-fetched. It will be negated soon as in this scenario the DAX should NOT make a new high (7600).

If you compare the DAX to the TSE (just click on the charts and move them one below the other) you will see that all the moves are synchronized but have a different amplitude. The TSE being commodity driven is by far the worst performer and has not nearly regained as much of it’s loss.