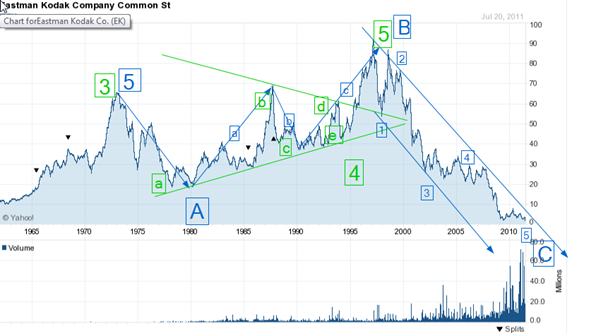 Actually it is not clear how you got here, was the first top THE top or was it the second? There could be a triangle (green) which would suggest it is the second top, but equally convincing is the perfectly formed B-wave which would suggest the first top, and that the entire pattern since about 1973 is one single irregular A-B-C correction. Today it does not matter (except that there are an awful lot of B-waves all over the place. Concerning EK itself the light must be on green. The low in 2009 was $2.01, yesterdays low was at about $2.25, if that holds we must have at least a “dead cat bounce”.

Actually I had recommended the stock earlier, see charts below, then and now;

Fundamentally this is not entirely that far-fetched. Kodak is among the best “brands” in the world, on a par almost with Coke. They actually invented the digital camera and then forgot to market it, a huge mistake that is now perhaps the most classic example of a company losing it’s focus. But we all still know what a Kodak Moment is; there is no Leica or Canon moment to compare! More interestingly, Nortel just recently auctioned it’s patents to a consortium of companies that wanted to keep a stranglehold on that kind of stuff. The book-value of the patents was about $320 mln, the auction pulled in $ 4.5 bln., more than 10x as much. Perhaps there is a little treasure hidden somewhere in Rochester as well. Use fun money only!!