EW contains a lot of ambiguities which is why 2/3 of the time you are really not sure at all what might happen. To put it in other words, sometime the light is green, sometimes it is red and most of the time it is yellow. Two stocks that have nothing much in common are green for the next few years (but not necessarily months). Gen. Electric and Morgan Stanley both have very articulate A-B-C corrections which are somewhat stylized in the charts below. By the way, these charts do not show the intra-day or week lows, for instance GE actually did get below $6). 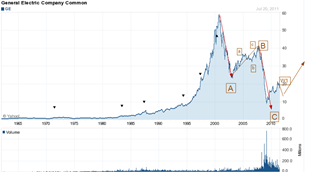 Unfortunately I cannot get them on the exact same time-frames, unless I put them together in one single chart;

Both these patterns would strongly suggest that these stocks are back on their way up in a new bull market. MS has already retraced 50%of the first wave up, whereas GE may have a little more to drop in what is presumable a wave 2. In both cases a retest of the lows cannot be excluded completely but the odds are better that you will win with these stocks than with, for instance a Pepsi; 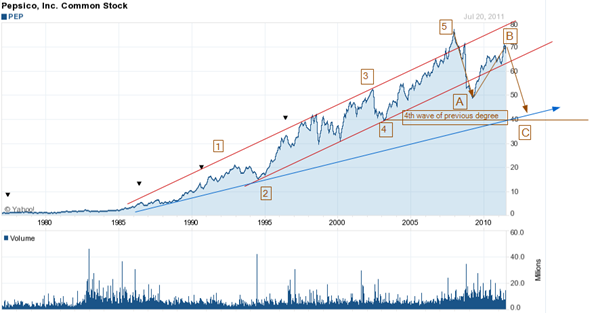 This one is bright red. Should it make a similar A-B-C as the others a target of about $40, where wave 4 of previous degree resides , would fit the picture. That is down some $30 from where we are now and there is only $10 to the upside until you hit the upper trend-line. There is nothing particularly wrong with the stock. It has a P/E of 17 and yields about 3% .