As my rumblings re. the QQQ may not have had the clarity that I had hoped, here is essentially a repeat using the Nasdaq Index by way of the NDX. First the big picture; 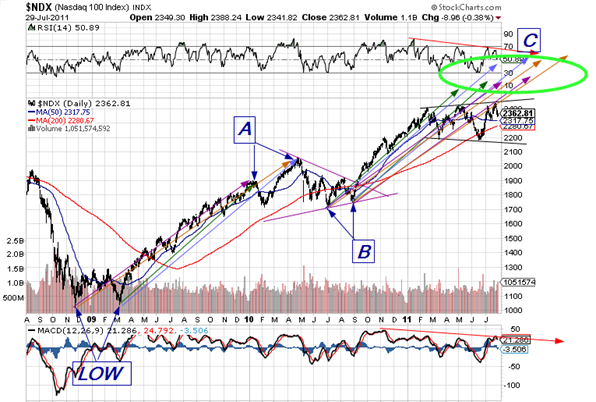 This shows the Nasdaq from the lows in November of 2008 to the present. The idea here is that we are looking at an A-B-C corrective (or counter-trend) rally. A (vector ) equality is by no means a requirement but it certainly adds credibility to any conclusion. What we do not know is which low was the real one in E-terms, Nov. ‘08 or, as in most of the universe, March ‘09. We also do not know is there actually was a triangle as a B-wave in the middle or something smaller and more abrupt. Consequently there are two tops for A and two starting points for B. Stockcharts allows for an easy transfer of an arrow as a vector. As a result the above chart has all 8 possibilities for C being vector equal to A (two for each color, blue, brown, green and purple) The light green colored elliptical area more or less contains all 8 outcomes.  The conclusion must therefore be that, provided that we are looking for vector equality, the Nasdaq must go higher. Again equality is nice but not at all required.

Furthermore, given the length already travelled and the tendency towards alternation, it makes a lot of sense to assume that the messy action for the past six months is a (irregular) flat or a triangle, both of which are sideways moves. This is shown in detail below; 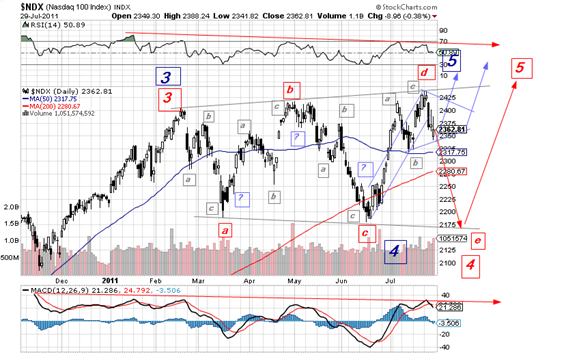 In the above chart there are 4 completed waves, all of which could be 3-wave structure. The first most definitely is, the second likely is, but the third is touch and go. The fourth is most likely not a 3-wave structure.  Supposing the all were subdivided in 3-waves than a fifth wave e would be required to complete the (expanding) triangle pattern. Only then can the “thrust” up take place. This possibility seems totally at odds with the deficit nonsense now going on in the US, at least in the timing.        The other choice is that the flat was in fact complete at point e, and that we are already in the 5th wave up. It may even be complete as is. If not we are in 4 of 5 with 5 starting any moment (see blue arrow) or again forming a small triangle to kill time and then completing the 5th of 5 (second blue arrow). This should not stretch the process more than a week or so.

The ultimate high should not be much more than 200 points higher than the present level. Wave 3 of 5 is about 200 points in length, with 1 a lot shorter. Usually, though not always, 5 would then be shorter than 3 so the top would then occur somewhere below 2560. That level corresponds well with the lower range of the green ellipse .

It is good to keep in mind that there are other possibilities not discussed here, and also that the top may already be in.  Symmetry is not an EW attribute , the Nasdaq obviously does not represent the markets at large and both the RSI and the MACD already look as sick as a dog. Time will tell.