Once upon a time , everybody in the institutional trading area had a Reuters in front of him (there were few hers), often complimented by a Telerate machine which was orientated more to the bond and money markets. Then came Bloomberg which gave you 2 screens for twice the price. In the mean time there are dozens of “speciality” screens competing in the same space. It is all about the distribution of information and getting that information and charging for it. All that is changing fast with the internet so anything is possible. One of the main variables obviously is the number of traders staring at these things, empty desks have their screens removed very quickly. Thomson saved Reuters from following the Do Do bird but the question now is how well the combo will work over time. Here is the chart. 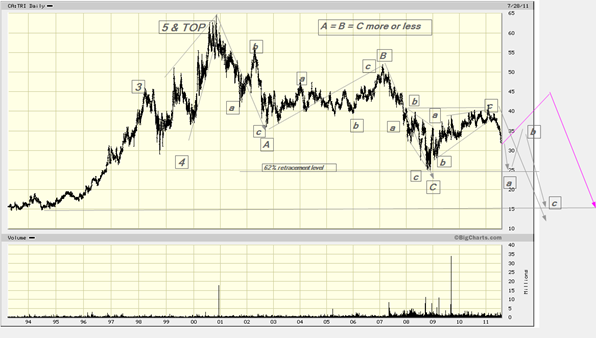 TRI did a perfectly symmetric A-B-C, with all legs more or less equal, a near perfect loss of 62% of it’s value, BUT this may not be all there is! EW recognizes 3 different corrective patterns that are essentially a repeat of the same theme. The first low at $35 in 2002 could have been it on its own. However the bull market thereafter is clearly corrective. So we got a second A-B-C down to $25 low. Again this could have been it particularly since the total loss now was at 62%. Here is the rub. The bull market since that low is a fairly clear a-b-c in itself, an initial leg, a pause, and then a wedge. This is corrective action,ergo the next move should be down to below $25 . The most likely, actually the only, pattern that fits is what is known as the triple zig-zag in EW jargon, and as the name indicates it is simple a three-peat of the same theme. More than three does not exist, better yet, has never been found to exist.

The pattern then is an A-B-C X A-B-C Y A-B-C. We are halfway the A of the third A-B-C. The only variation that I can seriously entertain on this one is that the correction is going to be far more complex, like in we are only halfway  and will resume our trek north to ,say, $50. A real possibility if X and Y become symmetric, in magnitude they are already about equal. Even then the stock should make a new low afterwards but at least would provide a nice trading opportunity (this is shown in purple). I would not count on it. By the way, the p/e is at 26, not particularly cheap.