Greenspan was flummoxed by the fact that bond yields did not drop after he started up the printing presses. He referred to this phenomenon as a conundrum. Being an ardent advocate of gold, at least in his youth, he must be even more baffled by the disconnect between the major gold miners and the “stuff” . This is true for almost all large producers, ABX, G, AEM, K and a few others but we will use Newmont as an example. Here is the chart, above that of GLD, the gold ETF that represents the stuff; 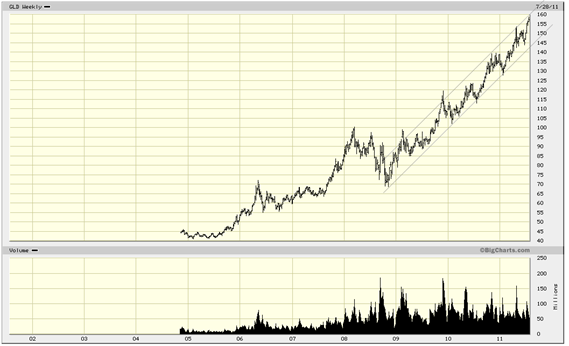 Both are in US$$ and lined up as best as I can get it. Newmont just reported and like all of them complained about rising operating costs. But how is this possible?  All the big guys still operate at a cost of under $500 an ounce, some a lot lower, so if you look at Newmont in early 2007 it would receive $650 an ounce (the GLD is 1/10th of the spot gold value) for a “profit” of $150 in our example. Today they would receive $1600 for a “profit” of $1100 or 7 times as much, (Even if we assume much lower cost, say $300 an ounce which may be more correct in Newmont’s case, it still works out to more than 3 times as much), yet the stock is now trading  below the level it was at then. Go figure. Production is not down in most cases and the cost of earth moving equipment certainly did not inflate by that much. This is the mystery!

It will, over time, be resolved by the stocks going up or the stuff going down. Unfortunately, looking at the stock there is literally no believable or plausible count that would have this go up. Like AXP years ago,(a sell by the way) this stock has a perfect wedge 5th wave, either the whole thing or just the 5th of the 5th. Does not matter much, it should go down, and not a little either.

The Economist blames the arrival of the ETFs (such as GLD) but also calls the stuff as useless as tulips. And when you think about it, humanity spends fortunes digging the stuff up, and then hides most of it in the underground vaults of Fort Knox and other such places. It is truly a mystery how humanity at large benefits from this. Greenspan ,who argued for the gold-standard , may even agree that that system worked, at the time, mostly because of the conventions and agreements that existed, and not by virtue of the value of the stuff itself, in other words it was also a fiduciary currency. There was a time that cigarettes worked equally well, with so many non-smokers that too may be hard to revive.