It is not the TSE, it is now the TSX, either way it is the Toronto stock exchange. It has been a great performer over the last ten years or so, outperforming most other markets. But we may also be at crossroads of our own and today our GDP growth rate of MINUS 0.3% may have put a little damper on the euphoria.

Today it was also the US borrowing limit that played a role. A few days ago it was Greece’s second bailout, now close to 250 bln Euro’s all told. Neither of these events have anything to do with reality. We know Greece is not going to pay its debts and we know that the US will, albeit with depreciated $$ , so the end result is the same. All this is just a side show in what will take at least another 10 years to resolve.

In the mean time where does our exchange stand? Here is the chart. 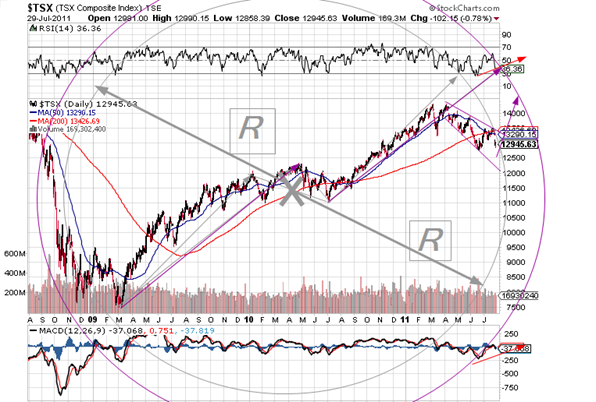 Remembering an analyst (I forget his name)  that was totally preoccupied with symmetry, I did the best I could to duplicate that approach , no doubt in a amateurish way. The X is at the center of the Canadian universe. Clearly there was an a-b-c of sorts from the lows of March 2009. I must confess that for the life of me I cannot count the individual sub divisions in such a way as to be sure that this is it. The C-wave does seem to have a neat 5-wave sub structure but Canada is unique in that regard. The DOW, the S&P and the FTSE  have been going side ways now for about six months. It is hard to get bearish immediately on those exchanges, after all , as the saying goes, “do not sell a dull market”.

Canada, almost invariable the laggard, may have changed it’s colors and may have become avant garde, as unbelievable as that sounds. But commodities are the last to peak and since our exchange is 30% commodities perhaps we will get hit first. The chart looks as if we are in the process of completing a wave 1 down soon. A rebound after that may well take us up 800 odd points in wave 2, but in all other respects there is not much to hope for here. Below is the pattern discussed earlier (see previous blogs) that could still be bullish, but time is running out. It is in purple with the purple circle. Symmetrically it would make a lot of sense if the low was , in fact , the Nov. 2008 low and not the March 2009 low. 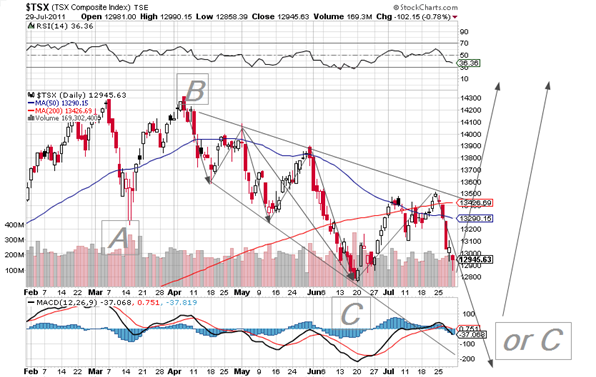 These patterns, the expanding diagonal triangle can have a very violent resolution once complete. The sub divisions in each leg should be 3’s, if they are not it could all be a wave 1 down! Nothing “fits” , so play it safe.