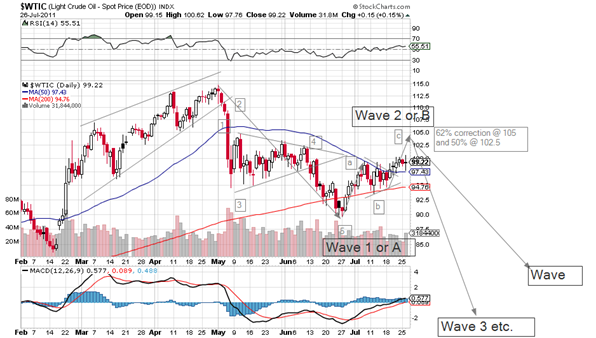 West Texas did not drop to the +/- $82 level as it should. This is a pretty good hint that the count may be wrong (OIL, by the way, did). Therefore I am changing the count. Triangles only occur in either wave 4 positions or in B-waves. It was assumed that the twirling around $100 was a B-wave but given the subsequent action perhaps it was a 4th. Mid june we had another triangle at around $95 which almost certainly is a B-wave. All of this makes the outlook more bearish than before. The $82 level originally anticipated would be reached if all of this is just a large A-B-C. But we could actually go quite a bit lower if this is a much more complex correction starting with an initial 5-waves !