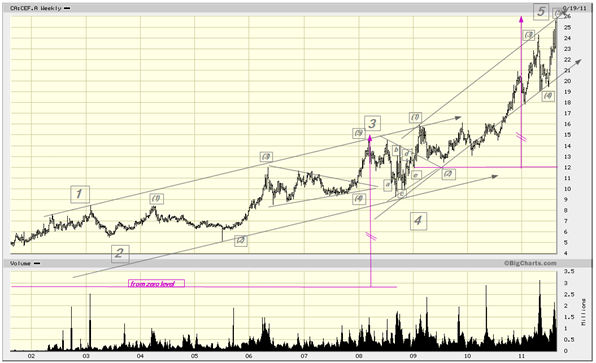 The Central Fund is a closed end quasi mutual  offshore fund incorporated under Dutch law. It has been around for a long time and is worth close to $7 bln. It is all about gold. Which is shown below by way of GLD; 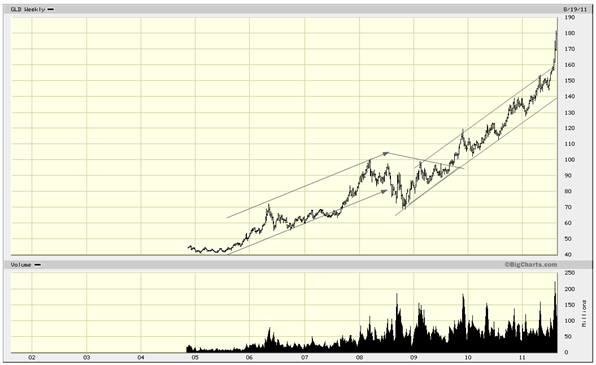 The charts are over a comparable period but since the GLD has not been around that long it starts in ‘05. From that time gold is up about 4 to 5 times and so is the Central Fund. The GLD is worth about 76 bln, 10X larger. The correlation is obvious.

Both charts have triangles in them, presumable 4th waves as that is the only possibility, the question is just of what degree. Given the size, one or one and one half years in duration, I suspect that they are of the highest degree, which would imply that sometime in the not too distant future the stock/unit price should drop back to that level!!  This should happen once the 5th wave or “thrust” is complete, i.e. after again 5 waves (or 9, 13 etc). On the Central Fund 5 waves can easily be counted, and wave 5 is now precisely equal to waves 1 and 3 combined: on the GLD 9 (after the triangle) so both could be topping now.

One , according to Greenspan, cannot tell if there is a bubble and when it will end. That is the wrong question. All bubbles, once they burst invariable drop to below their respective starting points ergo by selling at any time during their existence you will be better off than holding forever. Furthermore there actually is a very easy way to tell if you are in bubble territory, when the angle of ascend reaches the vertical you are there. From the looks of GLD that is NOW. For reference purposes I have added the Nasdaq “tech” bubble below, notice that the proportions are about the same!; 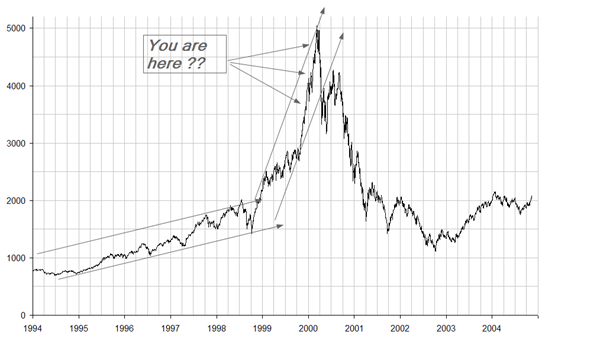 PS. Today the GLD ETF surpassed the SPY, which un till now has always been the largest and most active ETF as it represents the S&P 500. If bubbles are caused by the concentration of investable funds in a , usually, narrow asset class, this is it.