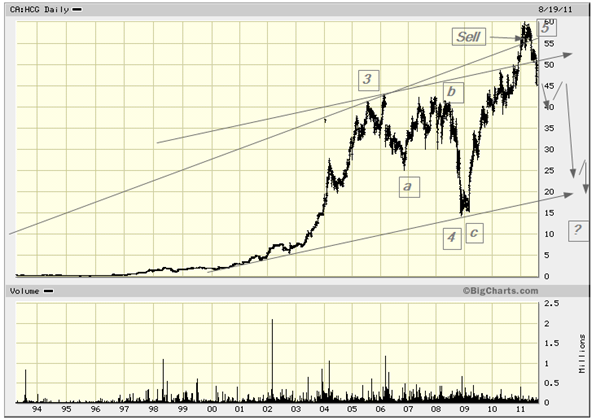 HCG has surprised me by its strength. At the beginning of this year it looked to me as if the stock might start down, with the proviso that it might go up another $5. It did $4 and then started its decline. This is a great company that feeds on the discarded leftovers of the big boys, much of which is still high quality business considering the fastidious requirements these big banks often apply. The P/E is quite low at 8-9. Even so I doubt that they will escape the general downdraft banks inevitable will face in the near future. Going lower. 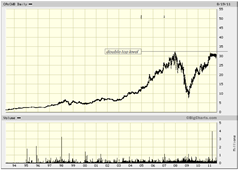 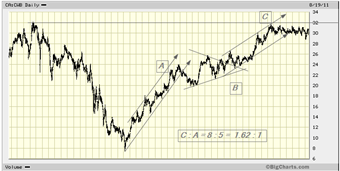 My concern with Canadian Western Bank stems partly from their statement to the effect that they would finance anything that is yellow and spews diesel soot; read Caterpillar and other such machines. Which, of course, makes them more sensitive to the vagaries of the mining and construction industry and vulnerable to demand destruction should the good times come to an end. The history of banking in Canada, West of Ontario is also not all that inspiring given the experience of the Northland and Continental banks in the ‘80-ties, confirming the adage that the exception proves the rule by going bust in very short order.

In EW terms this rally over the past two or so years is most probable a B-wave, not a 5th as with HCG (perhaps). The A – triangle B – C is readily identifiable by both the channels and the Fibo ratio between the two. I have no idea what keeps the stock suspended at these lofty levels ( for about seven months the stock has traded at a dollar above or below $30!) but, assuming this analysis is correct, a fairly violent drop could be just around the corner.