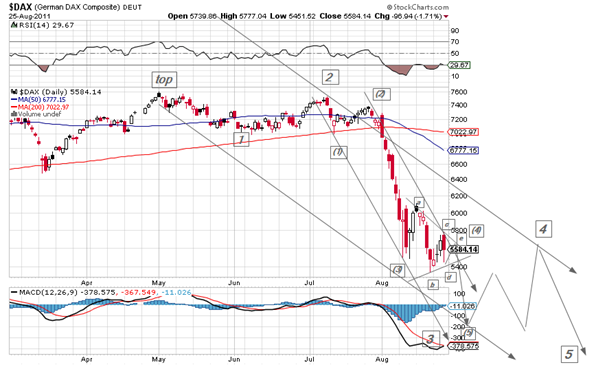 Today the DAX dropped 4+% in a matter of 18 minutes, I assume they were not impressed by Mr. Buffett’s impulsive interest in Bank of America. Others have it that rumors , quickly countered by new confirmations, of credit downgrades across Europe were gaining currency . An even less plausible argument was that since short-selling was banned all over Europe except for Frankfurt, they became the lightning rod for such nefarious activities.  Whatever the case, it fits nicely with the count I had in mind for the DAX as shown in the above chart. There are a good number of variations to this theme but this is roughly what I would expect.  The (intermediate!) low should be around 5100 to 5000. The risk is that things go faster and lower.