Speaking of expanding diagonal triangles, Japan’s Nikkei 225 is, I believe , a great example. Here is is once again using a semi-log scale chart; 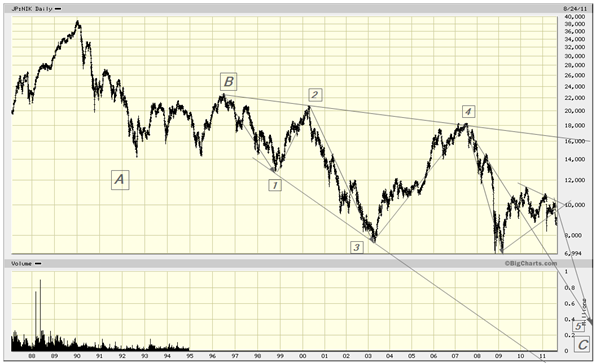 You do not have to go all the way to the lower trend-line. More often than not it does not even get close. But you should get a 3-wave move in this 5th leg down (as well as the others). A low below 6994 would achieve that. Perhaps 5000?? It is down about 2000 points since the first time this formation was presented, at a time when the market was pretty gang-ho on Japan.

The Japanese economy has just been downgraded, and the central bank keeps intervening to keep the Yen down with very little result. The population has stopped growing and is now shrinking at an alarming rate. Government debt is the highest anywhere in the world at about 220% of GDP, which supposedly does not matter as they own it to themselves. Who knows, anything would seem possible.