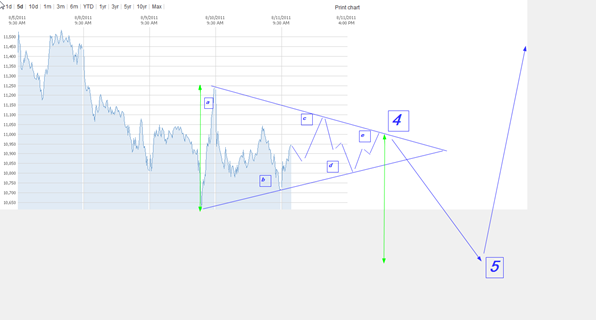 MSN has a cleaner chart that is almost a tick chart. On that info the 600 point surge we had after the Fed rate-freeze announcement could be interpreted as a 3-leg affaire, rather than 5. If it was 3-legs the triangle is still a possibility and , in fact, more fitting. Today we would be in c which should be about 60% of the 500 plus drop yesterday so 300 to 350, then down again and up again. In the end e would end at about 11000, putting the target at 10400. If it happens it could start late Friday or the next Monday. Do not trade on this, it is just an educated guess to give a roadmap.

PS, The flat is not out of the running!