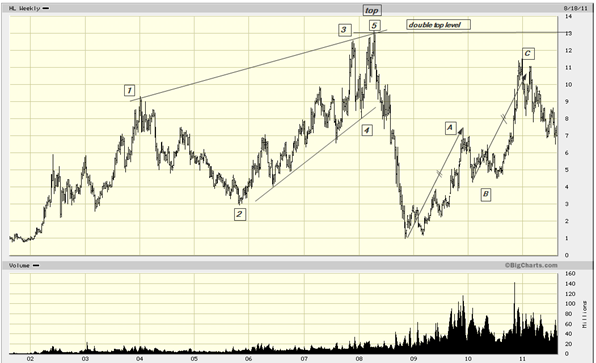 Hecla is the oldest US precious metals miner and also the largest and lowest cost silver producer. According to it’s website its cost for silver is a negative $1.45, which simple means that “side-show”, consisting of other metals pays for the entire operation and then some.

From an EW perspective the rise from below$1 to $13 is probable one single large “wedge”. In 2008 this wedge collapses towards the base but does not quite make it. This collapse, by the way, is a pretty good indicator of how well the precious metals actually “hedge” or protect you against financial turmoil. Then from the lows in late 2008 the stock rallies in what almost certainly is a B-wave counter-trend correction. In plain English that means that we have to go down again and establish a new low , $1.  Alternatively a more complex correction may be unfolding, but even then a return to about $ 4 is almost a given. The stock is already down by more than 40% and there has not been a shortage of turmoil lately. Looking at the SLV, it certainly does support the notion that silver may , in fact, have topped already.

Fortuna sheds some light on the situation but it is not conclusive one way or another. The stock appears to be making a triangle but that does not really fit, so I suspect that it is a 1-2 on the way down. A drop now through the lower trend-line should resolve the matter. That this is possible , regardless of what silver does, becomes far more plausible if one realizes that this company has some major environmental issues to overcome. 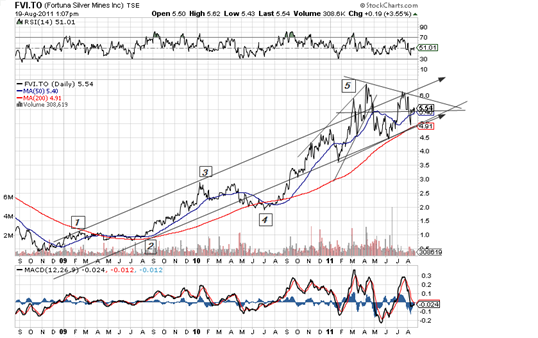