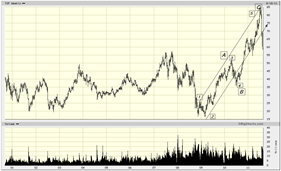 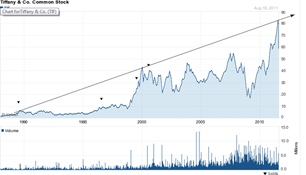 Unequal income distribution, according to some, is one of the main causes of economic depressions, and certainly a major cause of social upheaval based on resentment. In the US income or wealth distribution is now substantially more unequal than it was around the time of the great depression. The stats are staggering with the top 1% commanding 40% of all wealth or numbers like that. For companies like Tiffany  the less equal the better. Like stocks, the higher the price the more they sell,(known as Veblen goods) to a point. That point seems to have been reached with the stock at $85 or so and right on the 30-year trend-line.

In EW terms the case can be made equally for an oversized B-wave or a 5th, both are shown. Fortunately for the immediate future it does not matter all that much , as in both cases the stock should retreat to the level of wave 4 of previous degree, roughly at $15 . Unfortunately even a young lady like Audrey Hepburn, of good Dutch stock by the way, cannot save the company from that drop. A sell in my opinion.