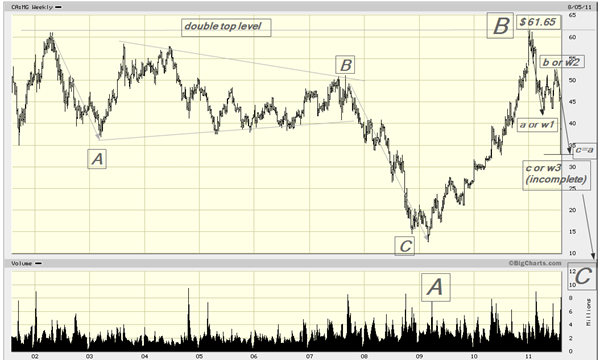 The chart at the top was from Jan 24, this year. The larger chart below that is the updated one as of last Friday’s close.

Magna’s probability of getting hammered were just excellent. Apart from the completion of a nice 5 wave up sequence over 30 or so years, the stock had shown near perfect EW patterns. Other “hints” were that the stock might double top, almost always a good time to stand aside, particularly if that is at a level that coincides with a Fibonacci value (61.65 compared to Fibo. 61.8). At the time the expectation was that F (Ford) would get creamed, from $19 to perhaps $7); when your clients have a tough time, you have a tough time. In the mean time the founder and major shareholder F.Stronach, who had lost a bundle horsing around with race-tracks, tries his hand at joining forces with a Russian oligarch, in a deal that seemed to , disproportionally , favor the oligarchs . Fortunately, that fell through after the differences became overwhelming. Then, as if to put the icing on the cake, with a little help of M. Harris , a former Ontario premier on the board , he decides to change the dual share structure and with it reduce his ownership (otherwise known as insider selling). The resulting payout totaling nearly a billion was the most egregious “bonus” ever received by management in Canadian corporate history. The premier , who had a reputation as a penny pincher was not pinched either, receiving director fees worth multiples of what he had earned in his entire political career. This will always be seen as some sort of high point in Canadian capitalism, fittingly coming from a company who’s main claim to fame was labor-arbitrage, that is fighting unions , a business model that has lost much of its edge in recent years!

Getting back to the chart, Friday’s low ($32.98) took the stock down roughly 50%(46.5% to be precise) from the highs. The optimists might be seduced by the fact that c=a at that point so there is a perfect a-b-c correction that may now stop at the 50% level, which also happens to be the level of 4 of previous degree (not shown). I very much doubt it. The proper EW target is below $15. If 50% is not convincing, another 50% may be.