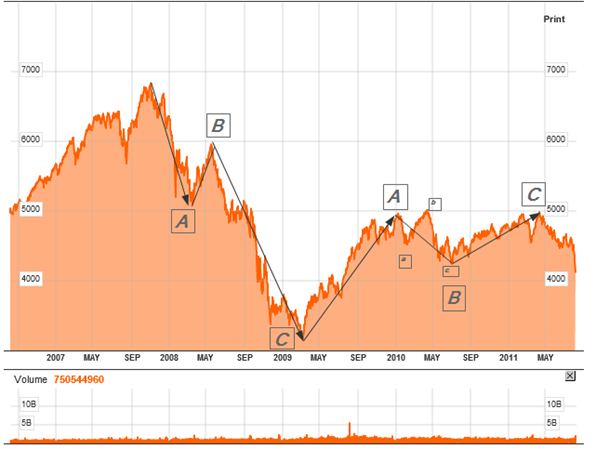 From Bloomberg, this is the ASX200, the main index down under. Notice that after the initial high (A) around October of 2009, it took another year and 3/4 to just marginally eek out a higher high, not even managing to take out the high in the intervening correction (b). This index went from loosing about 1/2, to regaining 1/2 and most recently again losing about 1/2 so far.

As Canadians we should be concerned with what happens down under. Even though we do not share the distinction of once having been  a continental sized prison camp, we do share all the blessings that came from being members of the British Empire Club, English being ,perhaps the most important. Lately we are both “commodity” countries which has come in good stead when feeding the insatiable hunger of China. Geographically, Australia is closer the the earth’s booming center so one would expect their market to do better. It has not. The TSX, in relative terms, was a bit over 6000 at the peak! The Aussie $$ ,on the other hand ,  did; 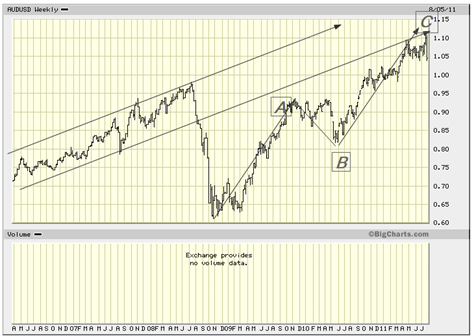 Roughly the Aussie $ follows the same pattern as the stock market, except it does it with much more gusto, an excellent reason to get out of Aussie $$. And, for that matter, the C$; 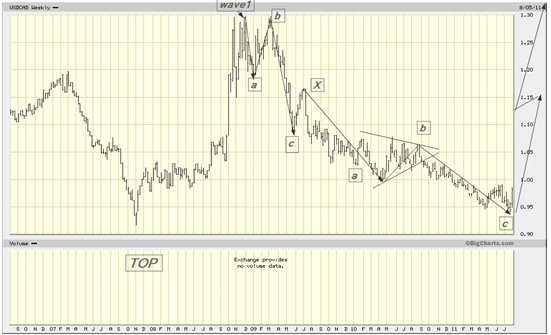 PS. Also from Bloomberg, Alan Greenspan said that Monday will probable be a down day as a result of the downgrade and all the turmoil. The Maestro is back in form.