Ritchie Brothers, they trade on Toronto and are in the business of auctioneering earth-moving and farm equipment. They have a near perfect EW chart. At this point it is not relevant whether or not the “top” is the top, suffice it that it is a top of some degree. After the lows – almost down by 50% – the stock rebounds in 3 waves (which could still develop into a 5-wave wedge) making a slightly higher high. All of this is classic “expanded flat” behavior, a model of which is shown beside the chart. The entire structure is a 3-3-5 and (apart from the wedge possibility) we are now in the initial stages of wave c which should drop below the earlier low of $15. C waves, the one we are in now, are always 5-wave affaires.

Now that Larry Berman is spending time in giving EW 101 lessons on BNN, complete with statutes of Mr. Fibonacci from Pisa, I thought I would add a little bit as well . This does not apply so much to RBA (but it might) as it does to the markets in general. As stated C waves are always 5-waves but there is a little complication one should be aware of. Everyone can count to 5, most of us have 5 fingers on each hand which makes that task a little easier, but often waves extend. An example is shown where wave 3 of C extends. The midpoint of the wave is called the point of recognition, for the obvious reason that this is about where hope fades and fear starts seriously. So you count to 5 and you think you are done. (the S&P  now at 1150 is down 61.8% and this could be a turning point, in Larry’s example). But guess what, you are not, you are only halfway; it quickly gets to be a little like the kids in the back of the car – are we there yet ? – 5 minutes after leaving home. Ten hours later you arrive at your destination, frustrated, demoralized and fatigued. 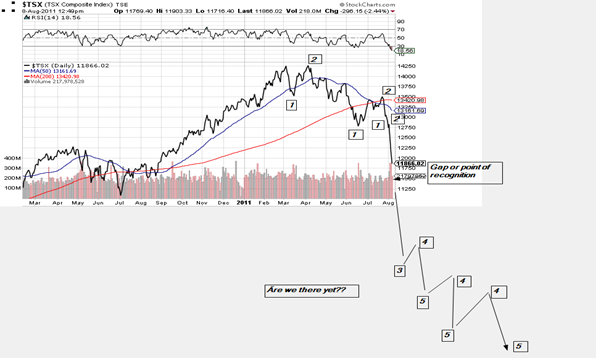 I use the TSX rather than the S&P simple because it expresses the situation a little better. In this case it is assumed that wave 3 of C extends , the most often occurring situation. For each 1-2 that you have at the top you should have a 4-5 at the bottom. Things can get worse if wave 3 of c extends AND wave 5 of 3 also extends, but I will skip that one. There are a lot of variations. We could, any moment now complete a wave 1 and get a 1000 or more rebound and only then continue the drop. It is impossible to know these things in advance, but even if the “how” part is not predictable, the “where” part is a little easier, and that is a lot lower.