Emera probable stands for something like Eastern Maritime Electric etc. , it owns Nova Scotia Power and has generating stations in St. Lucia and the Bahamas, among a lot of other things. As such it is an energy company but probable more weighted to the sales and distribution side than the extraction. It has also promoted green energy alternative. In short it occupies that sweet spot that, deservedly, attracts a lot of investors, especially momentum players. Here is the chart; 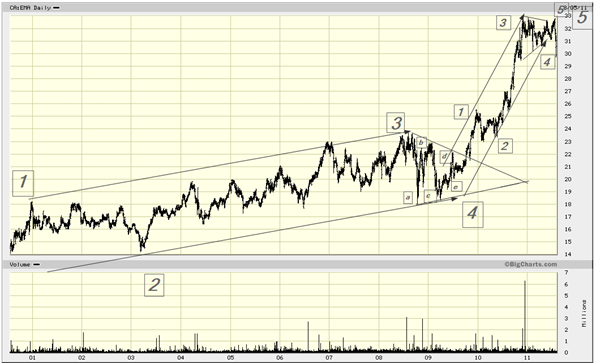 You can see that the stock deviates from its normal course around the time of the lows, late ‘08 and early ‘09, (a 4th wave!). It continues the flight at a much steeper attitude and doubles in a year and one half., and then it loses momentum and slows down to a stall speed. This is pretty clear from a one year chart; 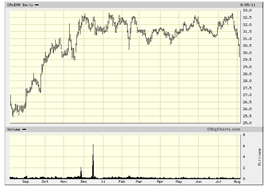 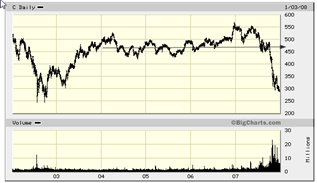 The one on the left is EMA, for a year it does nothing ( actually a 4 of 5 and a, failed?,5 ). For comparison purposes there is a chart of Citigroup on the right ( 2002 through 2007); it was able to levitate for about 3 years going through similar motions. In the end it dives to $25 or 1/22th of its value (these prices are adjusted for subsequent splits!). I have no idea if EMA will follow that example, however it is fairly common for stocks to fall back into preceding triangles , in this case about $18/$19. For anyone who has flown an airplane, it is a simple fact of life that once the speed is reduced to below the stall speed the plane loses its lift and literally drops out of the sky suddenly and unexpectedly. In the process the plain starts to spiral. The ONLY antidote to recovery, rather counter-intuitively, is to steer into the spiral nose down. In other words you have to grab the bull by the horn, which is why the present problems in the US have little to do with S&P’s downgrade and a lot with the fact that there is no one in the cockpit, and no one can find the bull. Worse even, the co-pilot treasurer has the gall to muse out loud about leaving his job.